Izzy and I had been targeting the swimrun rankings and competition this year. However, the rules for the prizes were changed near the end of the season, and to win we suddenly found ourselves contemplating entering both the sprint and the main Ötillö world series ‘1000 Lakes‘ races in Germany at the start of October. We went for a run in the Pentlands after work one evening and decided to do it …

So after arriving on Thursday and settling into our fantastic apartment, we went for a short run, which I managed to keep to the agreed length! And on Friday a swim in glorious sunshine. We nearly couldn’t find our way back in to our landing point, but otherwise survived! Last year we did very well here, partly because the water was colder than many people are used to. This year, it was 3 weeks earlier, meaning the water was still plenty warm enough to play in wetsuit-free. 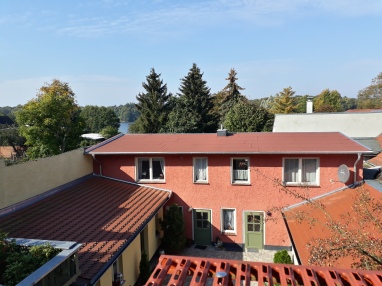 View from our apartment window, lake glinting in the background

Checking out the first run to swim approach

A tunnel of trees on the course

Veg for sale at the roadside

We stocked up at the supermarket and made careful plans for our food over the weekend. Andy had impressed on us how we should treat the events like a two day stage race and be careful what we did both during and after the sprint. Obviously this meant stocking up on as many kinds of foreign chocolate flavours as we could justify eating …

We found an idyllic swim entry – not so easy to spot on the way back!

Drying off in the sun

Saturday start was fairly relaxed – register, briefing, back to house to change and kill time, start at 11. The sun was shining, the gun went off and everyone really sprinted! I think we were leading the ‘sensible’ bunch but still went 4:32 for the first km. Approaching the first swim, our main rivals for the series prize were just in front. We’d been stronger swimmers than them when we raced in Borås earlier in the year, so I was confident of catching them. However, we got in and my goggles immediately leaked – something that hasn’t happened to me in a swimrun race before! I stopped and faffed but never solved the problem, swimming 900m worrying my contact lens might wash out or get infected, and squinting lopsidedly as I sighted. 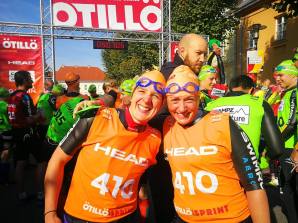 Start of the sprint race – Izzy’s goggles are upside down and we never noticed!

We never did catch Maria and Josefine either – turns out they’ve been getting highly effective swim coaching all summer! We were still close though as we ran through the trees. At one point we overtook but they sped up again and we tucked in behind. We had the points advantage so only needed to stay near them, not go crazy. Just then Izzy tripped and fell! It looked innocuous as the ground was soft. She said she hit her head, but she seemed OK and we carried on slightly slower.

Sunshine for the final sprint swim over to the castle

One of the sprint swims

As the race progressed, we kept the girls in sight but the pace was pretty rapid. On the final run we could still see them and were gaining slightly, but I was happy to stay like this. I ate at the feed stations even when I didn’t feel I needed it … it was important to stay fuelled and feed the muscles mid race today, ready to perform tomorrow.

I smashed across the final swim, thinking we might catch them up with a straighter line. Not quite, but we ran in to the finish just 24 seconds behind, in 3rd place. The girls who won were waaay ahead and also racing on Sunday. We finished, jogged back, had our milky drinks and a fried egg sandwich, went back for prize giving then home again for another egg sandwich, feet up, then pasta for dinner! 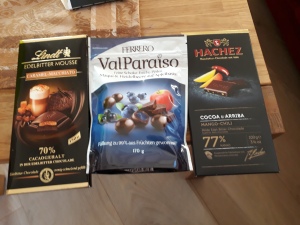 Izzy’s head was fine, but her hand was swollen from the fall, so we bought the cheapest frozen veg we could find in the supermarket and regularly iced it all evening. I even looked up compression bandaging on YouTube and used my compulsory bandage to do a pretty good job of swaddling it up. By morning it looked much the same, but we reasoned if she’d managed to finish today she could do it tomorrow…

An earlier start on Sunday as we boarded the bus in the dark. We set off a little later than expected and hit roadworks and a diversion on the way! We were calm as all we needed to do on arrival was get straight into the toilet queue and put our damp wetsuits back on. We chatted to Ulrika and Helena, the previous day’s winners, as we waited and then made our way to the start. Josefine and Maria came to give us a hug and say good luck. They said they were tired but we didn’t know if it was just bluffing 😀

The gun came as a surprise and we were off. No wrong turnings on the way to the first lake this time, and it was more like a triathlon swim, with a lot of pushing and shoving on the way. Two teams squeezed me from either side and I was left spluttering for air. As we got out to the feed station, we met Michael telling us to keep it steady and that the others were just in front (I think – though it was hard to catch whilst concentrating on everything else!). I wasn’t wasting energy here and tried to ignore everything else and make it our own race. We soon drew close to them, but every time we tried to pass, they accelerated a little and I decided to wait and make our move on the longest run, of 7km. However, as it happened we went past just before the preceding swim. 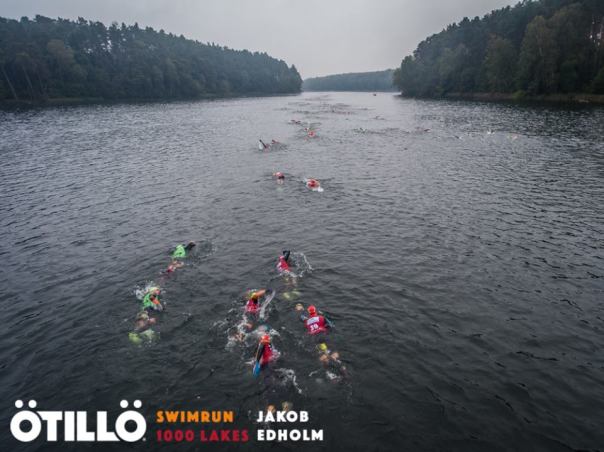 View down the first long swim

I thought this might be the crux, where we pulled ahead of a big bunch of teams. I swam down a short river section confidently, having just passed a few female pairs and seeing one we could catch ahead. Out into the main lake and suddenly a pair in orange bibs were coming past! What? I am not great at drafting but I jumped on their feet and worked hard to stay there. Eventually they pulled away, just as another pair came past and I went with them instead. This was like ‘sprinting’ a swim at the start of a triathlon, ignoring what had come before and was to come after! I was finding it mentally quite challenging to be racing so closely with so many other teams.

Long line of swimmers on the first run out of Wesenberg

We left the feed station first and were running through the woods at a fair pace. We could hear the voices of the other girls ringing out behind us for a long time. About 2km to go and I could feel the tow cord getting tighter. I was feeling tired too and hoping we had not pushed too hard too soon… A short swim and another 4km run which I found tough. I still had energy to admire and point out some of the enormous fungi growing in the woods around us though. The increase in support around the course was also noticeable and fantastic – I think the locals now had a better idea of what was going on!

First big swim of the long race from the sky 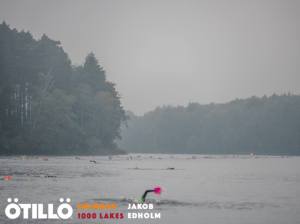 A misty day, lots of swimmers

At last we got to a long 1.2km swim and some clear water. We seemed to have pulled away from the other teams although the threat of them reappearing kept spurring me on. In fact it was as if we had finally ‘found our place’ in the race and had some space from everyone. The swim went on and on and on … But when we got out we were on a section we had done the previous day. I was hoping we might be in 4th as given who would likely podium, it would mean direct qualification to the world champs next year. It felt like we had overtaken so many teams, but I had no idea where we were now. 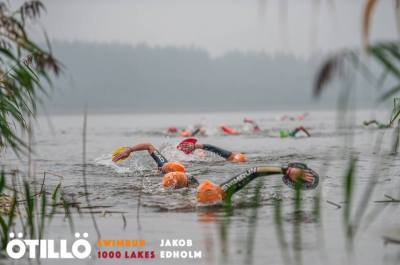 Coming to the end of a long swim in a group – that’s me with yellow hand paddle!

Helping Izzy out – though she had to shout ‘hand!’ twice!

We still caught a couple of male teams and finally were on the last run. This felt much harder than yesterday! My hamstring had been playing up a bit since September and now I could feel it affecting my gait. I said nothing and pushed on. The final swim across to the castle, we were catching two male pairs but didn’t quite make it! Sprint finish and we discovered one of them were our friends Ben and Jonathan. 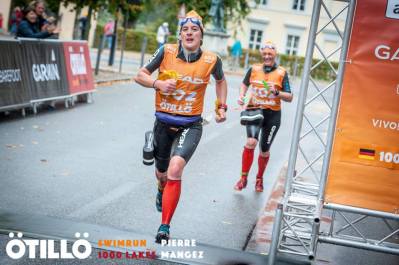 Sprint finish for the long race! We had worked so hard …

Izzy at the finish of the long race

Only enough for 5th place / 37th overall, although we had moved up from 11th in the early stages. Full results here. It was enough to win the series, despite strong competition from Josefine and Maria, plus Helena and Ulrika storming up behind with two speedy wins in two days. Our pace was faster on both swims and runs compared to last year, which I like to think is fitness but may have just been the extra degrees of warmth!

No qualification to the world champs this time. The girls get one fewer place per race than the other teams, which is something I disagree with. The strength in depth of the girls’ field has grown massively over the last couple of years, which is great. You can go all the way down to 9th here and see a team that finished 77th overall in September. However, there was a big build up for the series prize and we walked away with €2500, biggest prize ever! 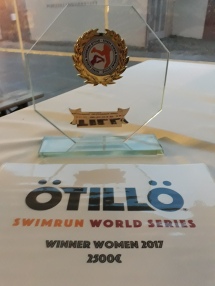 Thanks to race directors Mats and Michael and all the other organisers and volunteers, to the photographers Jakob Edholm and Pierre Mangez and to sportextremeswimrun.com for their support this year. Also to Graham at Physis who got my shoulder back in good enough shape after Ötillö for it to be pain free this weekend.

We thought we didn’t know many people going to this race – but turns out there were many familiar and friendly faces. It was great to catch up and get to know people better 🙂 Time for takeaway pizza and more chocolate before the journey home on Monday. Due to the persistent swelling and evident pain, I insisted Izzy went straight to the minor injuries clinic to get her hand checked when we got back – turns out she had a broken finger! No swimming for her for a while!

That’s the end of the swimrun season. I’m taking October off racing, before launching into a packed Nov / Dec with off road duathlons, an Open 5 and my first ever swim-free ultra.

This ardent supporter was there last year too, but her sign had got a full colour upgrade!