Following some time off after Ötillö, the plan was to do some fun bits and pieces before launching into a winter of trail running. Unfortunately, a minor hamstring niggle I’ve had for over a year flared up – a parkrun was the last overload straw. But I had already entered this event and was booked to go and see my dad and for Andy to do his first ever swimrun, so off we went!

Coming down into the first swim

A week of rest and I lined up at the start slightly anxiously. The first run was straight down a hill, the sun was shining, the sea was blue and the views were great. My legs seemed fine too, which was a relief!

I have done a few coastal swimruns before and I do love them. This one is a great length for beginners as well as more experienced people, and some of the swims were a bit ‘exciting’ even for me! We swam out between towering cliffs, round rocky headlands and weaved our way through buoys and across bays. The running was mostly along the coastal paths.

On the coastal path

Homemade flapjack at the feed station spurred me on as I tried to hold off the male and mixed pairs (I had a 5 minute head start) whilst catching as many male solos (who set off 5 mins early) as possible! I met Andy just before the second swim and even got a quick kiss! I was pleased to see he was looking cheerful. 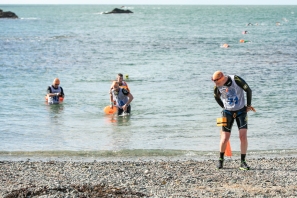 On one of the long runs, my hamstring started telling me it wasn’t better after all, but I did my best and battered on. For so late in the year, it was actually quite warm and the final climb up the hill on the road to the finish line had me huffing and puffing. My dad cheered me in and then we did the same for Andy. 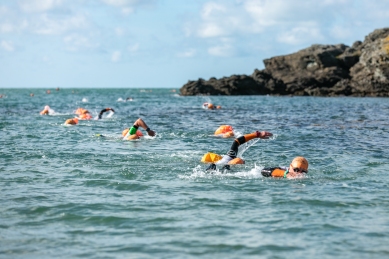 A perfect day then for lounging around, catching with people and eating the wood fired pizza that came out of the van 🙂

I was 1st female, 9th overall. Results here – but you have to filter out the people who just ran all the way – yes, it was official, as they were doing the ‘Holy Trail’ race on at the same time! Andy did well too, as he was almost inside the top third and I may have even heard him say ‘it was better than a triathlon’ !! 😉

After effects of racing on Andy …

Many thanks to Jonny and Chloe at Loveswimrun for putting on another super race. Highly recommended! And you can even extend your trip and enjoy some of the other delights that North wales has to offer. Also to photographers wildmanmitchell and SportpicturesCymru.

I got into the LoveSwimRun Llanberis event on a bit of an impulse. It wasn’t ideal in my overall busy June / July plans, but I was so glad I went! My dad lives in the area, so accommodation was sorted, as was a lift the short drive to and from the venue (thanks dad 🙂 ).

It was my second ‘short’ event and my first ‘solo’. From my experience and what I saw, it was a great format and I wish we had more races like this here! It was perfect for getting out and ‘training’ / having a fun race without having to coordinate with someone else or complex transport logistics. There seemed to be lots of triathletes / newbies taking part, and you could also go as a pair if you wanted to. I think it’s a good stepping stone to try it out and move onto longer races with a partner, if you want to.

View down the lake – we did end up the other end, and halfway back again

Back to the race – and I cut it fine at the start, scurrying in to the pen and hoiking up my suit with only a minute or two to spare 😮 . The race started in waves – male solos, then female solos, then two waves of mixed teams. So unusually, us solo women all lined up by ourselves and when the gun went, off we shot. Within a couple of hundred metres I was in lead. This felt weird. I could hear the ‘pack’ thundering behind me and when my watch beeped the first km wondered if I had gone out much too fast!

Kept reminding myself it was a short race though, and stuck at it to see what happened. Comedy entry as I focussed on getting my towfloat sorted (a requirement if you were solo), but forgot to zip up or bring my pullbuoy round. I got better though!

The race has more swimming and short runs at the start, crossing the Llyn Padarn railway twice, before heading off down the lake. I was unsure how I’d find the long 8km+ run in the heat and up a massive hill. Still, my pace was still good before we hit the zigzags and I ran it all, except the bits I walked 😀 . 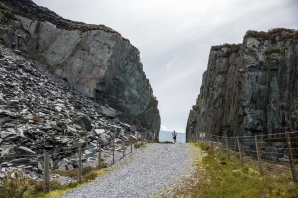 As we popped out above my dad’s house, the marking wasn’t clear. Hmm, I was sure we should turn left along the top of the quarries but the marker said go down the hill. I knew there was a troublesome resident along there and wondered if the route had been changed to divert round (I knew the area too well and knew you could go down, along and back up again!). No-one else was in sight, so I started trotting down the hill. When I saw no arrows at the bottom I diverted back up.

Past a tree pulled down since the evening before, and into the woods. Signs had definitely been tampered with, as the arrow on the junction had been twisted round so it was not visible. I stopped and clambered up to turn it back. Off down the hill again and I seemed to have lost some of the drive to go really fast, even though the descent seemed over so quickly compared to walking (a route we do often).

Getting back into Llyn Padarn was bliss, the water was lovely. This was the longest and final swim. As I went along I was feeling pretty pleased that none of the pairs had caught me up. At that moment, a male pair came charging up alongside!! I was having none of that and jumped on their feet, suddenly finding new speed. 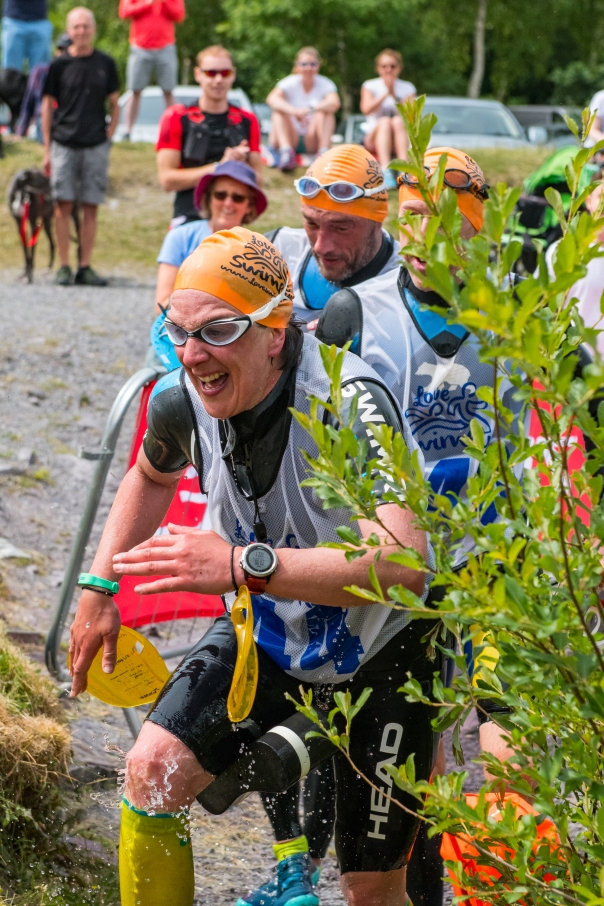 I had a plan … I could have a speedier exit than them and overtake in the last seconds up to transition. What this plan didn’t account for was a) me forgetting I had a tow float bouncing behind me b) me getting tangled up in their tow c) the last bit to the arch being considerably shorter than I had remembered when I had looked at it earlier. In a comedy move, I tripped over them, landed on my knees and palms (ouch), got some bewildered looks as they said ‘er, you go on if you want’ !! Ha ha – sorry – I was a bit over enthusiastic!

Great race, accessible to beginners but a good test if you’re experienced too, well organised and super friendly. Some nice prizes, and lots of spot prizes too. Recommended!

I came 1st female solo and 7th overall – results here. And a race video with more of the fabby views here.

Tin mug for winners, and a medal on a lanyard that will jigsaw with the Anglesey one in Sep – might need to go back!