It has all been very quiet on my blog since September! I am still here and after an arduous winter am hopefully re-emerging!

After Bantham swimun, Izzy and I went off to Cannes for the inaugural Ötillö  event there. My hamstring was still a concern and sitting in the airport, I felt a bug coming on. Not to worry I thought, it was warm and sunny! We cheered Andy on as a solo in the experience race, and he came back with tales of a terrible technical descent…

On our race day I was still not feeling the best as we got on the ferry, despite several trips to the bakery / almond croissant emporium since we had arrived. We were there to have fun though, and we set off at a steady pace which we kept up all race. The start was lovely – all around wooded trails on islands off the coast. We enjoyed the long swim back to the coast, benefiting from some spotting at the start of where to go. The route from there was varied – one minute we were along the promenade dodging tourists and running past the famous cinema. Then we were up into a park above town and winding back down the steps and alleys of the old part of the city before going straight up an old tramway and down the technical chute of death (as Andy would have it called). We found this OK, but got stuck behind a much slower team. There was a queue building behind and they showed no sign of letting us past. In a different race I would have shouted at them earlier, but this time we were in no rush and just persisted until a gap appeared. Later we ran past a group of proud nudists at a swim entry / feed stop (!) before winding our way back around the coast to the finish.

The hamstring was no worse, and we celebrated with ice-creams before we went off home for some deserved rest.

It had been a couple of months packed with racing, travelling and other life stressors. In the weeks and months that followed, I was plagued with a succession of worsening viruses and a general malaise that knocked me out of kilter and at one point landed me in bed and off work. I had a disaster of a trail race, couldn’t really train, wasn’t getting outside and doing the things I loved. I got scared to go out and do anything in case it tipped me into another illness and I didn’t know what was causing it. I resorted to reconnecting the x-box for amusement and am grateful to the friends who helped me out with messages, lifts and visits and generally tried to keep me grounded.

If all else fails, swim … this girl helped keep me sane x

In amongst all that we had the one and only 18/19 Open 5 event in the Lake District. I was determined not to miss it and headed down to go out with Lucy, with warnings about my maximum run ability / speed (thanks to hamstring) and general effort levels (thanks to illness). Things didn’t go quite to plan as we headed up the big hill on foot (“but that’s where all the high value controls were!”) and over-cooked the bike (“because it makes a ghost shape on the map!”). We ended up sprinting back late and I was quite emotional at the finish. Luckily, our total score was enough to get me to 10,001 series points – 1 second later and it would have taken another year! I got ill again after this race so was mightily annoyed, but took comfort from the fact that my legs had seemed to work on the bike (much-neglected of late) and my hamstring did not react to our hilly run. Really, it was also a race of true Rosemary-Lucy style…

In memory of a friend

Eventually, I went to see a specialist sports doctor / consultant, whose letter finally persuaded the GP practice to test my iron levels – ferritin (iron stores) and total iron were very low despite my haemoglobin being normal. This is a known issue for athletes and can affect performance, recovery and subsequently immune function. A bit frustrating, since I had asked for this back in November! Anyway, two weeks after starting to take iron supplements, I felt like a new person. Even when I got ill again I was over it quickly and maintained a positive mood.  The Dr also gave me some great general advice (‘do all this and you will be on the same regime as Mo Farah’) – i.e. one total rest day a week (really?!), check vitamin D levels (seemed OK), sleep more than 7h a night more than 6 days a week (only 7?), eat lots of fruit and veg (have you seen our veg box?) and treat a cold with zinc lozenges.

I also went on two amazing holidays. One to the Maldives for a Swimtrek – where the sea was as warm as a pool and it was like swimming in a tropical aquarium with all the fish and other sealife. Andy loved the place and cried when he left – we also had a great group of folk to share the boat and adventure with. I had hoped the sunshine would see off the bugs, but it didn’t. 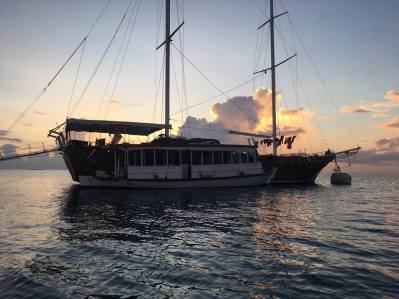 Later on I decided to cheer myself up by learning to XC ski in Norway. Some of the swimming holidays pals had egged me on to do it, and I have always fancied it (I have never done any kind of skiing before). Turns out it’s a bit harder to do then I expected, and involved a great deal of falling over! However, by the end of the week I was just getting the hang of it and wished I could stay on to consolidate … already planning my trip back next year 🙂

As spring wears on and the iron works its magic, my mood and general wellbeing is taking a sharp upwards turn. Sadly I had to withdraw from UTS50 😦 on the advice of my physio because my hamstring is still not right and I am not at all trained to do it. A tendinopathy is a real pain to sort out. ‘High maintenance’ we called it – needing to be put under strain, but not too much strain … I am now back up to my ‘normal’ weekly running distance but only just adding in any big hills.  80km / 5000m ascent is not the recipe for success at this point. There are other events I need to be in good shape for in the summer, namely an alpine trail running camp in July and Itera in August!

Instead of racing at Otillo Hvar (due to bugs, hamstring and Izzy also picking up what for her is a very rare injury), I headed to my dad’s for a sunny weekend. There I met up with Chloe (of LoveSwimRun), got some great climbing tips and actually made it up and down a mountain! I paid for it with sore legs later, but was so happy to be able to start considering such runs again, albeit still slow and with some twinges (strain, but not too much!). Really lovely to make a new friend with plenty of ideas for future adventures. Also managed to repeat the mountain thing in Italy on a mini break for one of the several 50th birthdays that seem to be happening this year, accompanied by much ice cream and pizza 😮 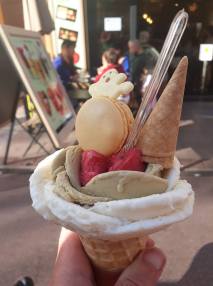 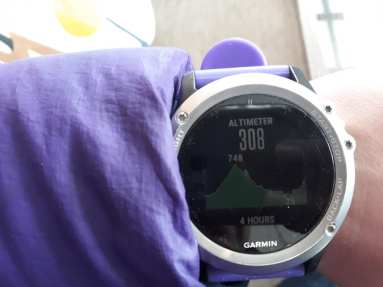 … and one in Italy

Inspired to do some other sports

This one also helped see me through, although if I had been there when this was taken, she wouldn’t have got much of a look in on the candy floss..

I’ve also been conscious I need to start biking again – swimrun training does nothing for your expedition / adventure racing pedalling legs, which are key. So I’m consciously heading to work on my mountain bike and taking the scenic route home. I no longer need lights and won’t be spooking myself in the dark or getting caught out in hailstorms! 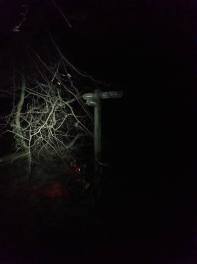 to daytime rides with friends

and recapturing the sense of adventure

Stay tuned for more Itera news as we head for an expedition adventure in Scotland!