My first triathlon since July 2015! I got sucked into entering the Ironman 70.3 in Edinburgh this year. I’ve never done an Ironman event before, but I couldn’t resist because it will be a massive middle distance race right on my doorstep. But that means remembering how to do triathlon, working out how to ride my TT bike, actually, even just doing some biking might help …

As part of the preparations I entered the Tranent sprint tri this month, and an open water standard distance tri in May. Apart from that, things will have to fit round my swimrun training, which is still a priority!

I am not a big fan of pool-based triathlons. For one, you have to swim in a pool! I get stressed by the thought of people mis-counting the lengths, or getting caught behind other people, or having to wait to let other people past. Because you have to go off in waves (just to fit everyone in), it also means you’re not head to head racing and, in this case, I had to wait over 3h from briefing / final transition set up until I started! But it was still the only option at this time of year.

Actually, the time passed quickly, checking out the start of the run route, clarifying the transition procedure, watching Glen swim and start his bike ride, meeting Andy who cycled up (and took the photos – thanks!), and generally faffing about. 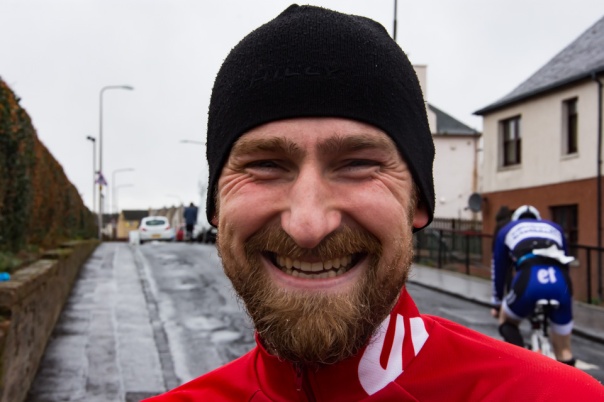 Glen – finished before I even started, despite a broken spoke

I was in the last heat, by a whisker. My estimated swim time was 11:50 (for 750m) and I was theoretically the slowest person in the fastest heat. The lane set off in reverse order, with me 5th in line. The person who went first was pulling ahead and I was beginning to wonder if I would get lapped. Then I noticed the gap was holding, then reducing. OK, so maybe not. Before long I had in fact closed the gap to starter number 4.

In the briefing and again at the poolside, the instructions were clear. No overtaking in the lane, if someone taps your feet, you must let them past. I tapped the man’s foot a few times down the first length I caught him. He turned and didn’t let me pass. Maybe I had been too polite and he thought I was just drafting. Next length, I was a little more insistent, especially as I neared the end of the length. He still didn’t let me past. I was getting ‘somewhat’ annoyed by this point, but did not want to break the rules by just barging past mid length. So the next length I practically swam on top of him and whacked him on the back of the knee. This was clearly not drafting. FINALLY he let me through. Thank you*.

I caught everyone else in the lane in quick succession and they all let me past with no issues. Final time (by my watch, which I stopped at the end of the lane rather than the timing mat) was 11:33. Incidentally, I was 10th fastest swimmer, so I was in the right heat after all. 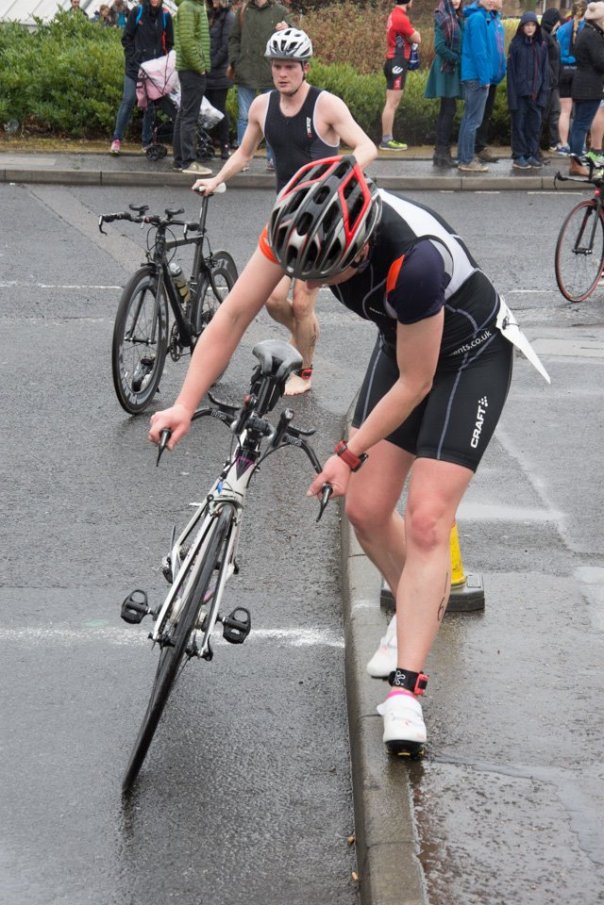 Need to work on mounting. Actually, how do I ride this thing?

It was a little chilly outside, so I had worn my swimrun vest with short arms under my trisuit for extra heat. This meant no faffing in transition, just on with helmet and shoes (new ones, testing without socks) and head for the mount line. I had a right wobble getting on, because I still haven’t learnt how to find my pedal with the shoe (and I am not up to flying mounts).

Now, the TT bike has carbon rims on the wheels, and the brakes do not seem that effective in general (at least not compared to the discs on my commuter and mountain bikes!!). It had also been drizzling with rain all morning, which had not been in the forecast. I had never ridden this bike in the wet before … Andy gave me warning that the braking might be unpredictable and to test it out before the first big hill. Yikes.

There was a traffic light as soon as we left the estate. Although the two sets later on the course had provisions made for them (agreed pavement mount and a timeout), this one did not and I and a group of others were caught for 15-20 seconds. Then we were off again, but I was not on full gas. I was riding within myself and making sure I stayed on the bars as much as possible. I got down the big descent then stayed upright on the pavement mount section (this had become covered in a thin film of mud and the marshals were shouting ‘slippery, slippery’ … ). Someone overtook just here but we were going the same speed up the hill and I didn’t want to draft. I practised taking a drink instead. 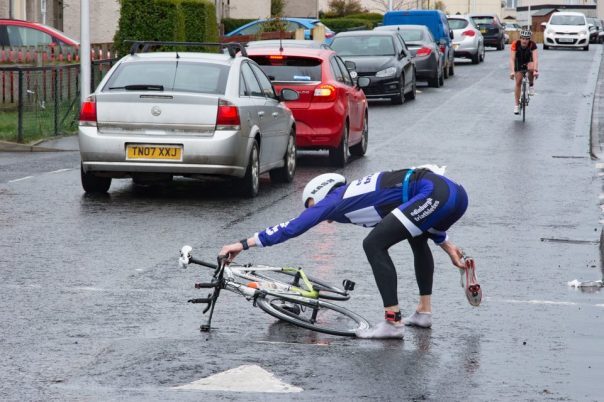 Another downhill, we were over halfway and turn left onto a bigger road. I knew the course and it was straightforward from here. Andy had said to go for it from this point, which I did. I passed the person in front as if they were hardly moving and was enjoying the speed! On reflection, I probably only really started racing from here. My average speed was well down on what it was a few years ago, so it was a bit frustrating. Once upon a time the bike leg was my killer leg and I was always at the sharp end. Not so now, but I must remember I have had other priorities, am not used to the bike and anyway, this race was so short we had hardly started before it was finished! 😉

Back onto the estate and someone in front fell off their bike dismounting! Ouch. I was more cautious and somehow managed to stop at the line. Click-clack into transition and Andy said I was slow … oh? (results suggest he was right, but I am not sure why!) On with my new tri shoes, OK they have been worn for a couple of parkruns, but this time I shoved my feet in no socks. Picked up a gel and set off, trying to get it open, eat it and put the wrapper in my back pocket, which I couldn’t find. Darn, but I knew the suit had one! Eventually I found it and started concentrating on the run. 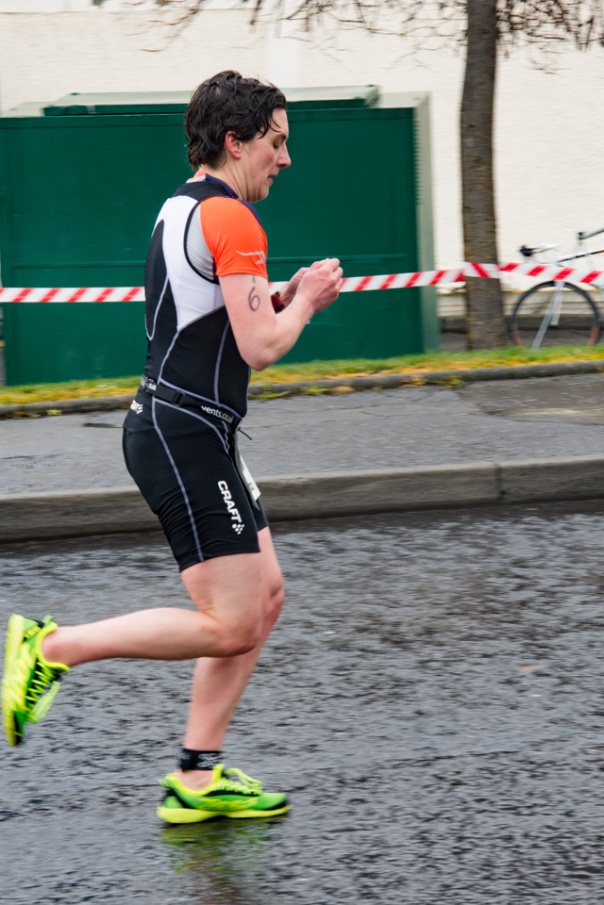 How do I get this thing open?

It was two laps on pavements round the estate. For once I was actually looking forward to this and was not daunted – run training must be having an effect. The drizzle had started washing off the arrows on the ground but I had a good idea where to go. My shins were screaming, I didn’t know why and I ignored them. Someone fast came past and I wondered how they weren’t in front on the bike – until I realised they were lapping me. Oh, the shame!! I could see club mate Peter up in front and was aiming for him, but after lap one he started pulling away slightly.

Onto lap two and as I rounded one of the final corners to face a draggy uphill, the marshal was packing up and leaving!! Was I that slow? But I knew I was almost last out on the course. Even worse, he was jogging up the hill in jeans with a backpack and I wasn’t catching him up. Stop!!! Eventually he did and clapped me past. Final effort and I threw myself over the finish line. 5.16km in 21:52. Compared to current parkrun times and given the undulations, that was OK.

Um, that is me actually smiling and waving at Andy

A rapid change was in order as prize giving was imminent. I just made it in time. I knew I had passed the other couple of girls from my swim heat, but the contenders were likely to be from the heat before. They did age category classes first and I was laughing when they said “1st Veteran, Rosemary Byde!” … this is my first year racing in the vet class as I will by 40 before the year is out. Overall podiums came next, and I was 2nd female (18th overall), a minute behind the winner. I needed a faster bike leg to do any better! But it had been a good race, well organised and the process will help me for the next two triathlons. 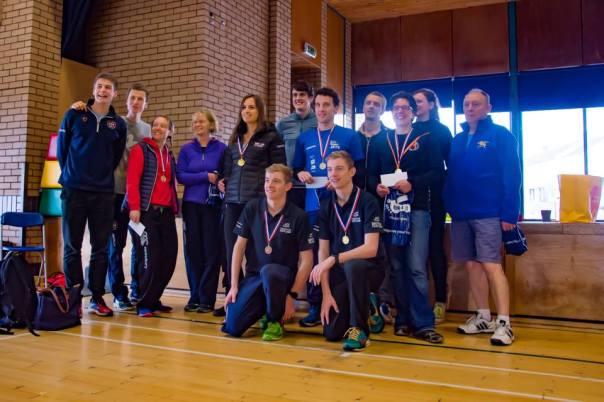 Summary of leg performance – based on timing mats (so slightly different to what I recorded). Full results here.