I love a good sweetie, or two or three. So when we were passing by Sallie Moonbeam’s traditional sweet shop in Glossop today I couldn’t resist. I didn’t want to stick to the same things I always go for (liquorice satins and herbal tablets – mmm, both yummy), because then I’ll never know what I might be missing!

After browsing the shelves, this is what I went for: 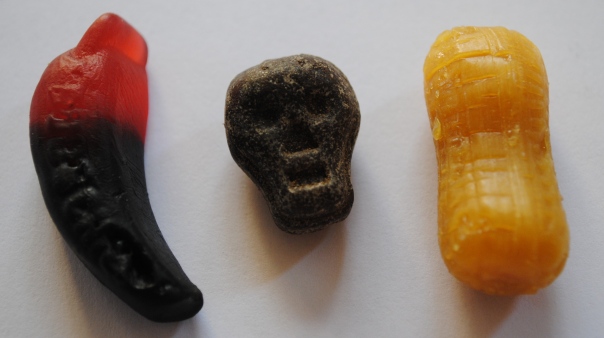 In fact, one of these was a safe bet, as I’ve had them occasionally before. One of them was edible, if a little strange – chewy chilli cherry liquorice anyone?

The other was just about the most disgusting thing I have ever eaten – it caused one lady passing in the street much amusement as we both pulled faces and loudly exclaimed our verdict. The dusty coating was bad, but then I thought it was getting slightly better … until I gave it a good crunch to speed up the process. Big mistake! My tastebuds were hit with something salty and liquid that I can’t really describe. It was so awful I had to spit it all out (something I never do!) and fish out a peanut butter brittle chaser as fast as I could 😀

If you want one, just let me know, there’s a half a bag left over!