A tale of two cross country races (run not bike!)

Along with a resolution to get back to training sessions with the running club, I had paid my membership fees for both Edinburgh AC and Scottish Athletics last year, with a view to doing the occasional race. The club is big and successful and I wanted to feel like part of a team. Finally an opportunity came round – an XC race on a day when I wasn’t somewhere else in the country doing some other event…

I duly signed up for the 3rd and final race in the East District League, plus the Scottish Masters – oh yes, I just sneaked into the age category for that one 🙂

The first was at Broxburn. I was picked up and off we went, with the amount of snow increasing the further west we drove. The day was gloriously sunny and the course covered in the white stuff. We didn’t have a lot of time, and after faffing to park the car, go to the toilet, find the start, get a number … there was not a lot of time for warm up. Instead of doing a full lap I ended up doing half a one and sprinting back to throw off final clothes and line up. 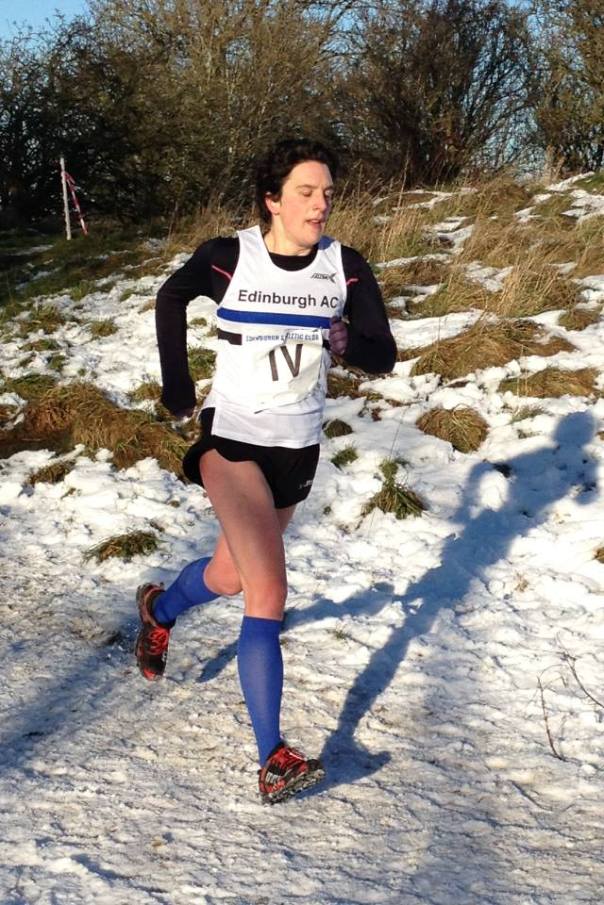 Think this was early on before I felt so bad! Photo: John Lenehan

The start was fast and furious, with lots of jostling of elbows. I went out much too enthusiastically and after about a km felt like I had made a mistake. I slowed down and tried to regain control, though it was difficult with constantly changing terrain, level of snow compaction and mini hills! I started to feel slightly better, though these things are all relative. Round we went on lap 2. Halfway I thought I was going to be sick and I was willing it to all end. But I couldn’t just stop, so I pushed on! Never been so glad to see the finish line – 36th and just about counting for the club’s vet team. 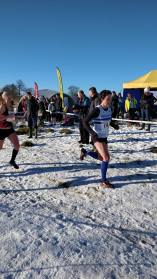 This was my first XC race since university, so it had been a long time. I was shocked how tired I was for the rest of the day, despite running less than 6km. What a workout, but it was fun, honest!

So much so, that two weeks later I was in Kilmarnock for the Scottish Masters Championship. In between I went and raced for 10 hours overnight on a wild hillside, but that story will have to wait until my next post. I was also rather well stuffed with Polish perogi the night before, which I was hoping would turn out to be some sort of rocket fuel.

I entered this to make up numbers for the W40 category – three to count. Sadly one got sick in the morning and couldn’t make it. This meant no team for us as, despite having four W50s, we couldn’t nominate one of them to run down a category.

Well, I was there now, so I might as well go for it! Learning from last time, I was a bit more conservative at the start. We all settled down after a km and positions didn’t change much after that. After the delights of the snow in Broxburn, this time we had gloopy mud and a grassy field that sucked your feet in ankle deep. There was also a steep climb and my favourite section twisting through some trees.

Two laps again. My legs were heavy and I had thoughts going through my head that I wasn’t recovered after the previous weekend, and what about tomorrow when I had another race lined up. Nothing I could do though, so I ploughed on. This time I was comfortable charging into the finish straight, buoyed by the shouts of some of my clubmates. Or maybe not, as afterwards I felt queasy again and had difficulty breathing normally! 17th, which I thought sounded quite good, until I remembered that I was practically the youngest there 😀 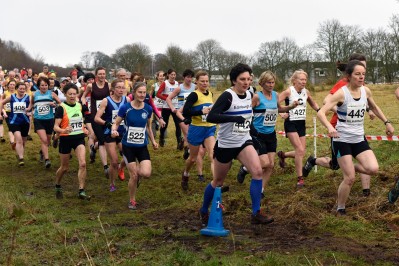 Four of us in one picture – Jenny already up ahead somewhere! © Mike Scott

My favourite bit through the woods © Mike Scott

Jenny came 4th overall and the W50 team (Jill, Sue and Karen) did brilliantly, easily winning the team prize for their category. W40 – well, we need to get more people out next time because we had potential! The event was really well organised by Kilmarnock Harriers and the course was interesting, so I’d go back.

Thanks to all involved – host clubs, Enid and Karen for organising the teams and entries, Richard for the tiffin that got sent over in his absence and tasted fantastic, the people who gave me lifts, all the other athletes who cheered, photographers and Alex for making sure I did not do too much on Thursday! I’m sure it must be good for me somehow, I might do one again 😉

It’s not all about the running: Perogi / rocket fuel fest