We wanted to visit my dad at least once this summer. My calendar is always full of ‘potential’ races, most of which I don’t end up doing. However, ‘mysteriously’ we ended up in Wales at my dad’s just when there was a swimming race on at the local lake!

Looks perfect for a swim

I’ve done an event run by this company before and had been impressed. This time they had three different length swims on offer, with separate classes for wetsuit / non wetsuit. I was keen to do the 10km, maybe without the suit. But eventually I was talked down by both my boyfriend and my coach into doing the 5km with a wetsuit! (I’ll just save that notion for another time 😉 ). Andy decided he would join me in the same race. 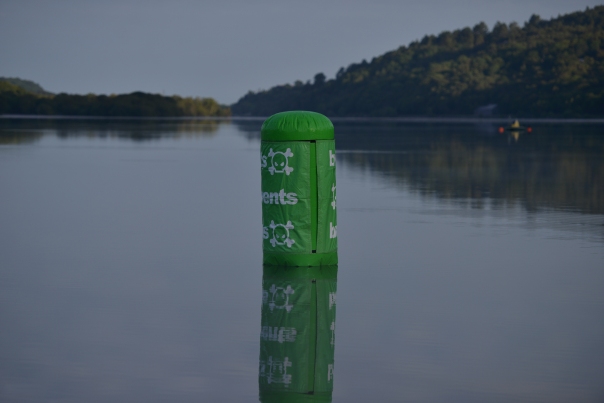 We woke up to a pleasant morning and walked down through the woods to the start. Midges had appeared from somewhere and time flew by so fast that I ended up getting changed whilst standing in the toilet queue ..

We scuttled to the lakeside just in time for a briefing that didn’t seem to be happening and jumped in for a warm up. The water was pleasant and exceptionally calm. Just before 9 we got out and waited a bit whilst there was a glitch with the timing system. At this point we got a very brief briefing, then we were all allowed back in the water. It wasn’t exactly clear where the start line was, so I shuffled up to the first buoy and chatted to a young girl doing the 10km with no wetsuit. She was lovely and I hope she did well!

Spotted checking out the course!

We wondered if the start was really here as there were a lot of people huddled around at the shore still. Suddenly someone shouted ‘attention racers!’ ‘go!!!’. We were off. I quickly got into a rhythm. Round the first lap and still with plenty of people. One of the legs was straight into the sun so the buoy was impossible to see until we were almost there, but I kept following other people. At the end of the second lap we headed for shore to jump out and back in again. A number of racers seemed confused at the last buoy, turning left to go round again instead of into shore. The kayakers were directing them.

Getting in for a warm up

Ready to get in and swim

All intently waiting at the start line that wasn’t

Now THAT’S the start line! I’m off to the left, at the front.

I leapt out, resisted the urge to put my goggles up and run off up a mountain, and was straight back in again, heading out across the lake. Suddenly it was a lot quieter in the water as all the people doing the 2.5km race hadn’t got back in. At the end of the third lap I was passing people but couldn’t work out if it was people slowing down or people I was lapping. I got to the last buoy and was ready to turn left – but wait?! Where were we going? The next buoy seemed to have moved! Indeed, I later found out that it had, so I wasn’t just going mad.

We all swim away

Final lap and I thought I should give it everything I’d got. It turned out that was what I was doing anyway as nothing much different happened! I was trying to keep myself conscious of my technique, doing all the things I’ve been working on this summer. I’d felt my timing chip shift just after the start and had been paranoid it was falling off, but tried to ignore it as I kicked. Despite a determination to focus, I found myself drifting off and thinking about the plotline of the gripping audio book I’d finished that evening…

Now I was definitely lapping people as I’d come up on them so fast I’d almost go straight into their feet! Out of the corner of my eye I could see another swimmer going a similar speed to me. We were on our final leg and I decided to push it for racing fun. We merged, though I couldn’t get a look at their face to see if they were a boy or girl! We were side by side, matching each other’s stroke and sprinting for the finish. Now I was concentrating 😀 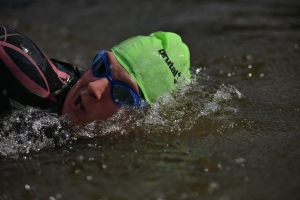 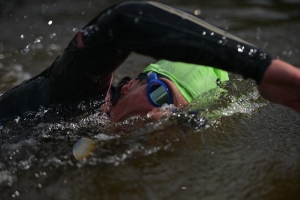 Suddenly they stopped to look around whilst I kept going. I smashed it into the shore, staying horizontal as long as possible; it’s quicker and in this case made it less likely to shred your feet on the sharp stones! I sprinted under the arch, panting for breath and then recovered in time to shake hands with the man who I’d just beaten 🙂

The online results said I was second and I collected a little slate trophy. Discounting a couple of people who looked like they had switched to the 2.5k, I was 8th overall. Not bad. However, later that night I saw some comments on facebook from a pair of people who had mixed their chips up at the start – one of whom was a girl who had gone 30secs faster than me but was listed under the males! Darn, I was relegated to 3rd (overall unaffected)! I was disappointed at first, but it was still great to be on the podium and in the top 10.

We found out later that some of our friends had been racing too, but we completely failed to see them! Andy got us drinks and excellent cake at the coffee van and we wandered off to meet my dad for lunch.

Post race relaxation – at the top of a deserted foggy mountain by 9:30 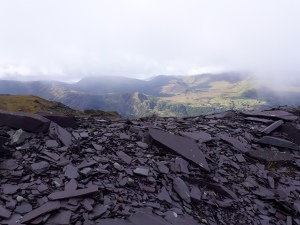 Views of the mountains from Tuesday’s run

I book-ended the race with some parkrun tourism, finally getting to do the tough and lumpy Penrhyn course on Saturday, then a run up and down ‘my dad’s mountain’ – Elidir Fawr. 20 minutes faster than last December – swapping frost for fog and wind!

Thanks to the organisers and to Babs Boardwell for doing an amazing job of capturing people’s faces in a swimming race!

That’s my last official event before this year’s Ötillö – stand by for the big one!

Posted on 24/08/2017, in Race Reports and tagged race, swim, Wales. Bookmark the permalink. Leave a comment.