Andy and I had planned a birthday trip to my dad’s house in North Wales. He was complaining how he was missing out on races that were on at various times we’d be away. After a quick bit of internet searching, I found out that there was going to be an open water swim in the large lake right next to where we’d be with my dad!

There were just a few things to sort out, like the fact that the closing date for entries was only a few days away, and we had to apply by post, with cheques, SAEs and verification from a coach that we were up to the swim! Now, this was a BDLSA (British Long Distance Swimming Association) event. This meant that the rules were very different from those for triathlon. In fact, in some respects they were the complete opposite. Here are a few of the ones we had to take note of:

There was not a speck of neoprene in sight at the start and I heard one swimmer at the end of the 4 mile race declaring she couldn’t wait to get her hat off because it was so hot!

Andy and I had entered the 2 mile (3.2km) event. He was much more gung-ho about it than I was. We had 4 weeks to get used to swimming in cold open water without a wetsuit. I am sure I read somewhere that it is actually possible to acclimatise to a useful extent in this period of time.

I began with a 21 minute swim at Threipmuir reservoir in the Pentland Hills. I got out cold in the wind and rain. Next I managed 35 minutes in the sea at Mappleton Sands on the east coast of England, near Hull. This swim was notable for the swarms of invisible somethings that brushed our fingertips. At the time we had no idea what it was we could feel, and the visibility in the water was zero. Imagine my horror when I peeled down my swimming costume to see I had acquired a collection of marble-sized jellies inside! Luckily a post to the OSS facebook page soon revealed their identity as sea gooseberries, also known as comb jellies. Completely harmless to humans. 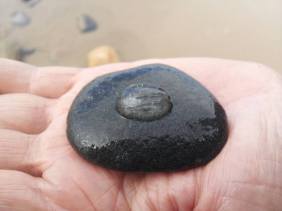 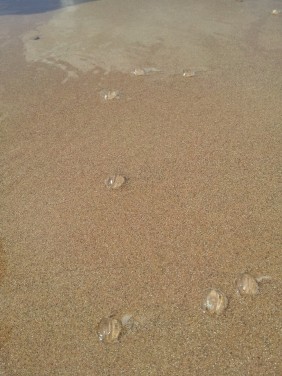 Imagine finding a load of these inside your swimming costume!

Next up I lasted 40 minutes in Threipmuir and sunshine. Then it was off to swim with The Wild Ones at Portobello beach. They told me it was 16 degrees, but I think it was nearer 14. I got ice cream head and it took me two attempts to properly get started. We swam with a few jellyfish for 30 minutes, by which time I was purple-lipped, had white hands, couldn’t speak normally and was shaking violently …. moderate hypothermia (and not for the first time)?!

An hour later I was back to normal after putting on excessive layers of clothing for a sunny day at the beach, drinking tea and eating an egg roll with the gang before cycling home.

I was then back at Threipmuir. I was determined to stay in as long as possible. I was feeling a bit cold after just 20 minutes but stuck at it for an hour and it didn’t get any worse. This was a mental game! It was just over 18 degrees and although cold, I wasn’t too bad when I got out. I was more worried about the fact that it seemed to be taking me a good 2 mins to swim each 100m if estimates of the marked course were right, which is much slower than in the pool or in a wetsuit.

Last proper swim was at Ullswater with Marie after our mini mountain marathon. I attached a gps watch to my goggle strap and off we went. The water was ‘really warm’ and we easily did an hour without feeling cold. But the gps does not lie and we had only covered 2.8km. 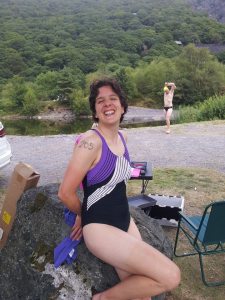 The day before the race we were already in Wales and thought we’d test the lake out for 20 minutes. It was lovely, but I was shivering when I got out! Andy seemed totally unperturbed though.

On race morning it wasn’t as scorching hot as it had been the previous few days. It was still a nice summer’s day by British standards though. Registration was the most simple process ever; tick your name off a list, get your number written on your shoulders and hands, and you’re good to go! The atmosphere was friendly and welcoming. Quite a few people chatted with us as we waited for the start and watched some of the shorter ‘try it out’ races. Soon it was our turn. We had a roll call as we got in at a little bay which was slatey underfoot. We had a one mile loop marked out and the 1, 2 and 4 mile swimmers all set off at once.

It was a very civilised start, with a much smaller group than in a triathlon, and less thrashing around and aggressiveness. I was going fast and got into a second group of swimmers that formed on the way up to the first buoy. This is where we turned to go across the lake. It was easy to spot where we were going as the marker on the other side was lined up with a distinct change in vegetation. At the next turn, we had a very long leg diagonally back across to the end of the lake near the start. I had no idea where we were going, but found someone good to draft until we reached a weather station halfway over. From there, I could see the orange buoy we were aiming for.

One of the things I had done in practice was trying to get used to a more regular and frequent sighting pattern and this helped on the day. I may too often guilty of swimming in crooked lines – which is just extra distance for the sake of it!

After the third buoy we turned back towards the start / finish. I just lost contact with 3 other swimmers I’d been near at this point. I think I was slightly distracted by looking for my dad on the shore (didn’t see him), trying to wiggle a sudden cramp out of my toes (successfully), figuring who I had to shout my number to for lap counting as we went past (got there eventually) and dealing with a totally numb finger on one hand. I tried clenching and unclenching my fist as my arm cleared the water, but it was making no difference. In the end I just swam with it, even when my thumb joined the numb party!

So as I got back to concentrating properly, we were heading across the lake again. Nice and easy to sight. Then we rounded the buoy and seemed as if the three swimmers disappeared in subtly different directions in front of me, the kayakers were nowhere in my sight line and I had no idea what to aim for! I panicked slightly and paused a couple of times to try and see anything. It is strange how your mind makes you scared in these situations. I couldn’t really go far wrong but I suddenly felt all alone in the middle of a vast expanse of water with no points of reference!

Hit this to finish!

Once I got over being silly, I picked something white that seemed to be in roughly the right direction. As it got closer I was delighted to find it was the weather station! Brilliant. Now I started racing hard to the buoy at the end of the lake, trying to catch one or two people. Round we went and sprint finish for the end. I didn’t quite get them but was delighted to have completed in 53:51 with almost exactly equal lap times. If the course was accurate, this was 1:41 per 100m and the extra speed and a toasty lake (18-19 degrees C) meant there wasn’t even a little shiver on me when I got out.

The field was much smaller than normal, which I am sure helped me get 2nd placed lady in the 2 mile freestyle race. What a great day! In another life this type of race might have been my speciality, but I grew up in Birmingham at a time when open water swimming wasn’t as popular as it is now. My mum did make enquiries for me, but there were no clubs or venues near us to do it. I left the race buzzing and thinking I should look out a few more of these events in the future!

This race was a great way to distract me from worrying about Itera, an expedition race I’m doing for 5 days from the 11th August. You can find out more about it here, or like our facebook page here to follow how we’re getting on.