With Itera looming, I was feeling like I hadn’t been out in the hills on foot enough. At first this race was penciled in to do with teammate Paul, but he was otherwise occupied being ‘official’ at the Commonwealth Games. I called a friend, who said yes! I was all set for 4 hours of running off road, whilst navigating to controls to maximise our score.

So Marie (this year’s super speedy Celtman champ) and I headed down to the Lake District on a Friday night in her van. We parked up just along the road from the start and after talking half the night away it was time to snuggle down in the back. Luxurious accommodation for me compared to a tent. We had set an early alarm as there was a suggestion that it would stay dry until later in the day. However, when we woke up the rain was pounding on the roof. I wasn’t keen on a pointless early start, so we promptly went back to sleep for another half an hour!

I was slightly anxious. I haven’t done a run-only event like this before, and we were going to be using a Harveys map, which I’m unfamiliar with. At the hall we asked plenty of daft questions about what various symbols meant before we decided to bite the bullet and get going.

We started off straight up a impossibly steep hill which made my calves scream. Marie was happy as she was bilberry hunting on the way up. We passed many sheep tracks, all going the wrong way. After gaining the ridge we briefly enjoyed a run along a path before diving back off the hill and finding a way through the head high ferns. We were convinced that here and there ‘we were following a path’, or that ‘someone else had definitely been this way’ … but these could have been figments of our over-active imaginations! 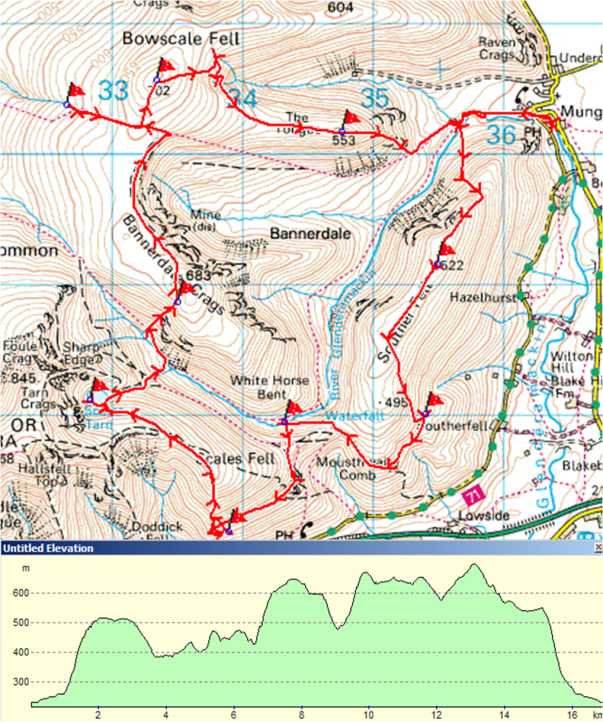 Our route with the control locations marked.

The pattern was set for the rest of the day as we (successfully) contoured round trackless terrain and went up and over ridges. We pondered whether the sheep would show us the way, how a guide dog might lead us to controls, that the skull in the grass was a sign (of what, I’m still not sure) and how we could do with a bionic extending arm to reach out and dib from afar. As we ran round a cliff top my foot slipped and a gasp from Marie made me look to my right – to see a vertiginous drop! As I concentrated on route finding, Marie concentrated on making up a song about slidy rocks.

Past a stinking dead sheep we thought we might be sick. Unfortunately, this was the only out-and-back we did, so ‘nose nav’ was called into play as the mists came down on the way back. The second last control was an easy one on top of a hill. All we had to do was follow a bearing and run out along ‘The Tongue’. This was where we made our only serious navigational mistake. It was really foggy (not for the first time that day) and as we ran, it didn’t feel right. We tried to correct, but I couldn’t match the small patch of ground we could see to the map. A fortuitous combination of a family materialising from the mists and telling us that we were indeed where we thought we might be, and the clouds parting for a second to reveal a ridge got us back on track. 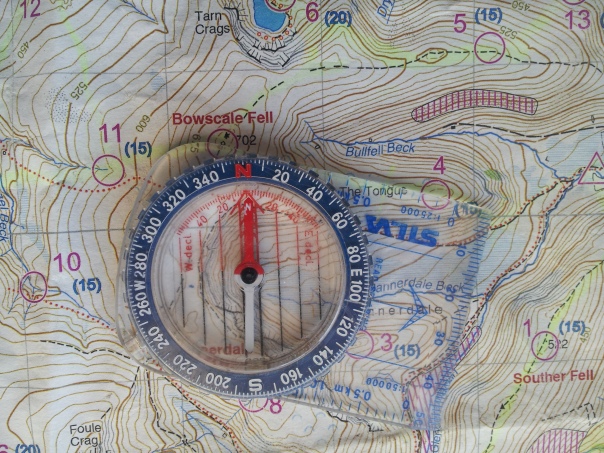 The last bearing we took, so I could check it was right! It was, but our track (map above) shows us veering off further north.

We discovered what one of the funny map symbols meant (peat hags), nabbed the last control and made for the finish. Only a steep downhill bum slide and more ferns to stop us! By avoiding the temptation of going up Blencathra (just because it looked fun), we had timed it perfectly. But we had not timed for our late mistake. We ended up sprinting for the end, trying to keep ourselves less than 10 minutes late, which would mean losing a LOT of points! We nearly took out someone photographing with a phone that we thought was the dibber box! We made it with just seconds to spare.

Looking at the results and checking with some wizened fell runner types in the hall afterwards, it transpired we had not taken the popular route. My plan to do the hard stuff first had back fired slightly, as we only did hard stuff and ran out of time for the easier parts. Everyone else ran around the slightly less steep northern side of the map, where apparently the ground was ‘very runnable’. Oops!

Never mind, we had a whole load of fun. It rained but we weren’t cold and it was great to be out in the hills feeling mildly competent about accurate navigation, even if our strategy left something to be desired 🙂 .

After the run we filled up on delicious pea and mint soup, hunks of bread, tea and cake. The organisers were really friendly and it was a good race. We topped off the day by heading to Ullswater for a gorgeous 1 hour swim before heading back up the road.

I’ll be doing the Itera expedition race in a team with three other people from the 9th August. If you want to read a bit about us and keep up to date with our progress, you can ‘like’ our facebook page here.