Lucy had to choose between Open 5 and a holiday (skiing) and picked the holiday. Hmm, I wondered who I might persuade to race with me. I asked Elizabeth who agreed! Hurrah, we were off, but due to other commitments, only for the day, checking in at a nearby BnB for the night and stuffing our faces in one of the many nearby pubs the night before. 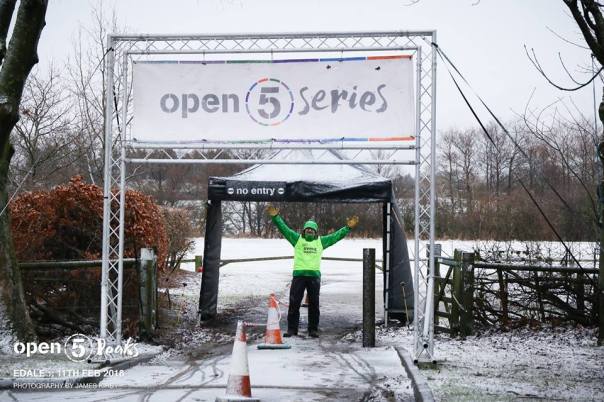 As we went to sleep, the wind rattled the windows. On waking, snow was falling from the sky and it looked wild outside. Dinner had been massive so I wasn’t really hungry at breakfast, which is unusual. Off to the start and we were almost last into the car park that was free, but which came with a walk to the hall. We wisely took all our stuff with us.

Time seemed to fly by between registering and it being time to go. We had decided on the long drive down that it was better to bike first. This was Elizabeth’s forte and we would favour more of that and less of a run. Plus, if it was going to get cold and snowy we’d be warmer starting dry and the paths might be less obstructed. By the time we had come up with a vague plan, left the coziness of the hall, dusted the snow off our saddles and made it to transition we had 1 min to go until latest start.

An easy beginning along the road before we turned off uphill on the rough stuff. I slowed to check for features and when / where to look for the control, and looked up to see Elizabeth already powering away. Despite recently coming off worse in van vs Elizabeth, you know that someone who can finish the Highland Trail 550 will be a biking force to be reckoned with. I worked really hard to catch up. It was properly snowy and fun over the top, then slippery on a descent where I lost contact and had to shout ahead to make sure we didn’t miss a control. A descent followed that I’d not be able to ride on a good day, but I remembered it from a previous event and was ready to walk.

Then we were off along an easy track and all was going well. Into a small settlement and I was pondering our original route choice. We were making good time but checking the distance, realistically, that 15 pointer in Bradwell wasn’t worth it after all. Decision made without debate, we moved on quickly, heading straight through Hope and up the other side of the valley. 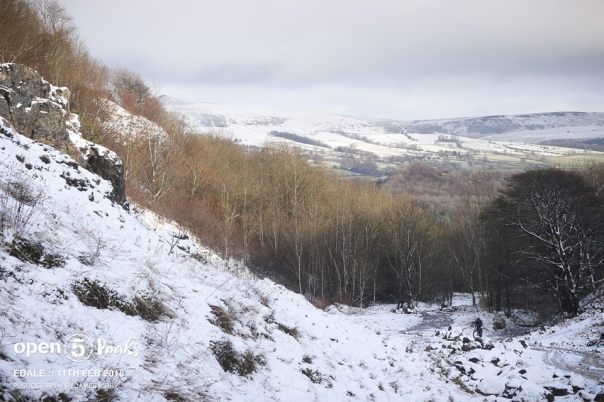 A climb I had to work hard to ride up, just before we started walking and freezing …

We passed some 4×4 cars coming off road the other way, with one woman behind the wheel with a smile as broad as her face! Then we caught up Ali and Barbara. This surprised me, but I hardly had breath to explain that I had to keep up before the next control!! From there it got very snowy. It was hard to tell the difference between the track and the road, both covered in snow. I cursed not checking on the start line whether we could use the road and cut onto the path further up, so we took the path and were soon walking.

Then we passed the cut through, easy to use, bother! Maybe cost us 5 mins at most though. It was slightly uphill and the wind was blasting us so hard that even when it looked vaguely rideable, it wasn’t, as the wind would push us off line and into a drift. Last race here I’d been just as cold, but with sleet instead of snow and we were at least riding then. As it flattened off and after what had seemed an age, we finally got back on. It was only now that we finally left behind a man out for a walk who we’d first caught up with about 5km earlier! Soon we were out on what was theoretically tarmac under the snow, and at the top of the broken road.

There was a 35 points down the hill. When we got there we were both frozen and my teeth were chattering. We talked about putting an extra layer on but decided to see if the climb back up would be enough to warm us up. I was looking at another 30 point control and debating the bike / run balance, but then decided no, not worth it. I warned Elizabeth we had a long fast road descent which would almost certainly be unpleasant and not in the slightest bit ‘warming’.

As we crested the top in silence, the blood was coming back into my hands and I was groaning with the pain. I think it was as nothing to what Elizabeth felt as we came into transition. With a recently healed broken collarbone and a still not happy broken finger, her whole arm was going through some sort of torture. We grabbed our stuff, got out of the field and dived into the hall. I heard later that we were not the only ones to nip inside!

Typical conditions we faced later in the race

I couldn’t help with the pain so got on with sorting out the run map, where all the score markings had washed off. The most important thing when we went out would be to keep moving, so this was time well spent nailing down where to go. After a toilet trip (me) and half a cup of hot water (both of us), we were ready to go back outside. Bizarrely, I still wasn’t really hungry and I think I only ate a couple of bananas all race.

Within 20 mins of the run, the gloves were off and sleeves rolled up. Running is really a magic body warmer-upper! The first part was an easy, if sometimes muddy, run in the valley. The map had a slightly awkward distribution of scores, but we had agreed before that going up worked better for us than running fast on the flat. So we committed to up, taking the fast route on the road we had so recently descended. 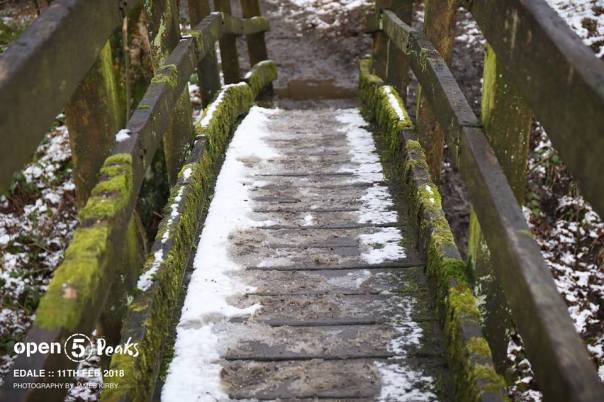 Here be a run control

Onto the ridge and we had met my calculated ‘cut off’ for diving over the top for a sneaky bonus control at a small quarry worth 15. Back up to the ridge and after we had cleared the slippery steps to the trig point, the running was glorious. We had snow and views and were making great progress. Although it seemed a long way to the next control, it was totally worth it as we dropped down, searching for the right tree.

We crossed muddy fields too, but the best bit of the run was up on that hill!

Then it was a cruise back to the road and a couple more controls before heading with a little sprint into the finish chute. Less than 4 mins late, 8 penalty points, the 15 had been worth it!

Having started last, we also got back last and had barely downloaded and grabbed some chilli and hot tea before it was prize-giving time. As some of the other classes were called out before ours, we realised we had a good score. We won the female pairs, but also came 9th overall, a rare feat! Results here.

It only reinforced my belief that ‘bad’ weather races favour me 😉 Biking first was definitely the right choice, especially when trail conditions unexpectedly deteriorated, as we were able to cut short without over-running our planned time too much. The art of keeping moving and not letting our pace drop after map checks was good discipline. We probably also took fewer risks … which paid off this time! 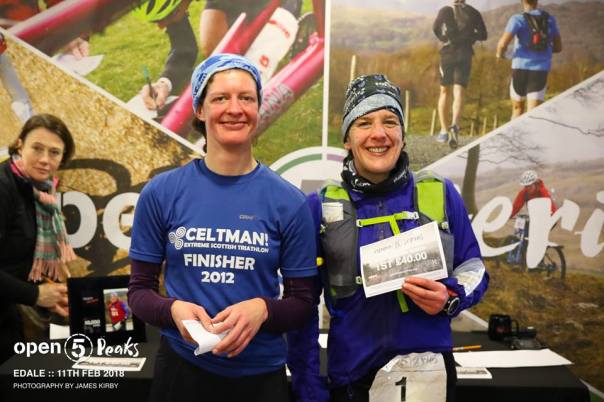 We regretted our laidback departure, as upon leaving the snow was coming down again. We couldn’t get out over either of the passes towards Manchester and ended up diverting via Sheffield and Leeds … Um .. Not the plan. We did discover though, that you can get a good curry and rice at Wetherby services, and I introduced another person to the pleasure that is Rheged services, just off the motorway at Penrith and easily overlooked. I just missed a train in Glasgow and had the joy of waiting on the platform with the other assorted 23:30 passengers before finally making it home just before 1am. Think that is a record!

Another great race from Open Adventure. Thanks to them, to Elizabeth for agreeing to come with me and doing the driving and to James Kirby for pictures.

The valley and surrounding hills