Pre-race preparation was perfect, with a café stop, a wander round an outdoor shop, a photography exhibition (tweed making in the Hebrides) and a pub dinner. Shame about the early start, but we successfully navigated round all the closed bridges and got a space in the village not too far from registration.

Whilst waiting for Lucy to arrive I got chatting with a few people about the routes. The bike looked fairly straightforward – with the main decision being two controls stuck up on a fell. The advantage of them was that they were on the Roman road (High Street), so visiting them would make my dad happy.

Now, which pen to use?

Oh, go on then, give me the highlighter.

When Lucy appeared we got ready remarkably quickly and headed up to the start. But then some last minute gear fettling threatened to eat up all that spare time we had. Luckily the right screw was twiddled in the right direction first time, and we were ready to go! 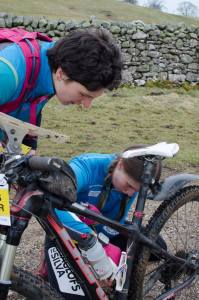 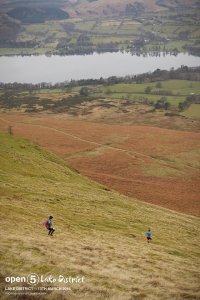 Run first as usual, and we set off at pace, soon hitting a long road stretch. My shins were complaining but I just ignored them. We had to leave an out and back fairly early on – as it turned out that might have been our best chance at more points but it just didn’t seem worth it at this stage. We were soon enough heading up onto the hill and I was enjoying the softer ground, even if we had to leap over tussocky stuff.

There was a choice to be made between a straight off-track line to the furthest out controls, or a route on tracks that we decided would be faster. We also got to check out a section of bridleway we’d potentially be riding up later. Even better, we got there with a mountain biker and were able to see that a) he was riding but b) only a little bit faster than we were running. 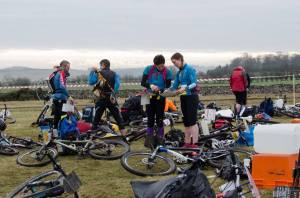 Still got time to check the map again

No avoiding going that way!

Descending a steep bank I was left behind (as expected) but generally I was feeling good. Lucy had raced the day before as well and was only just back from the tooth infection that had done for her last month. I was keeping up without dying, which only tempted me to look at the map, which wasn’t too helpful. We stopped at a control, ‘ignored’ it, ran downstream, then back up. A mistake from a combination of the paths on ground looking a bit different to the map (which fooled me) and me distracting Lucy (who wouldn’t otherwise have been fooled by that).

Fresh from a trip in the bog

But Lucy shows how to run properly!

She was getting a bit tetchy as we were running out of time. I hadn’t noticed, but she was right. 1h55mins gone already, and there was no way we’d be back in 5 minutes! Nothing for it though but to stick at it. I looked at the bike map to check our route still made sense in the light of reduced time and to make some comparisons between different point collections.

We flew down into the finish. The longest run time-wise in a while and I think our longest distance Open 5 run ever! Close to 20km. Off on the bikes and it was an ‘easy’ road loop to start with. The sun came out and the lanes were pretty even if they went up a hill. We feared this would be a repeat of the Forest of Bowland, where the optimal points route was short run and long bike. 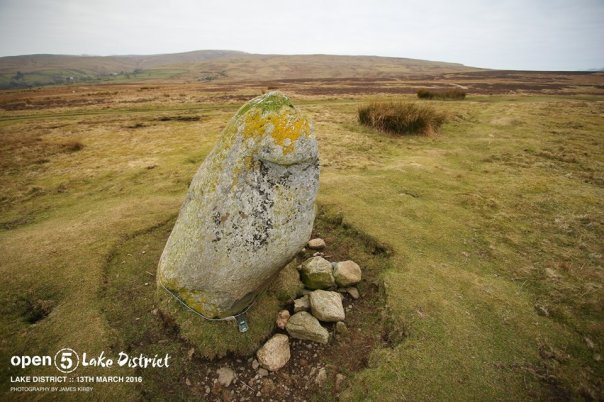 Not the ‘Cat Stane’ (which is at Edinburgh airport!) but the ‘Cop Stone’

However, as I pondered I wasn’t so sure. I still thought we could get round all but two controls, and maybe even out and back to one more. It was tempting as it was the one on the Roman road. We calculated 30 minutes to get 15 points, an hour to get 55. As we rode we debated and thought it would be close for the 15 pointer. We thought about other combinations – would cutting it short on another loop on the way back be worth the offset? Sadly, no, we decided it would be nuts to try and we should play it safe. Then I think we relaxed slightly, alarmed at the prospect of getting back 20 minutes early.

Realising what was happening, we changed gear again and hurried up a bit. Lucy led the way down a fun, fast rocky descent towards the shoreline of Ullswater. It was impossible to read the map at that speed with those bumps, but we pulled up just before the bridge with the control. The furthest one out was up a sharp little kick to a church. We tackled it off road, deciding it was shorter and better graded than the road – and we were right. 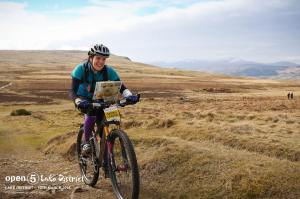 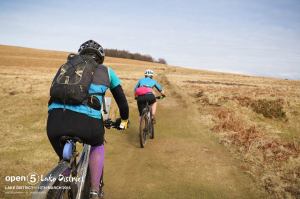 Typically, having gone from thinking we had loads of time we now realised we had to get a proper move on. We estimated 14km and we had 40 minutes.

Pushing the pace along the lakeside I wondered if Lucy would need a tow, but she was safely tucked in my slipstream and that was enough. Good thing too, as I didn’t have it in me to go any faster and felt slightly queasy! It wasn’t until we turned up the final hill some time later that I gave a short helping hand. There was No Way we could get back late on this one after all our earlier debates!

I didn’t dare think we were safe until we hit the final bit of bridleway, screeched down the hill, faffed with a gate and hammered into the finish. 5 minutes early! Brilliant.

We decided it hadn’t been so crazy to do a long run today after all, even if it had been slightly unintentional. It had been a race with much thinking and strategizing on the move. After so many previous events where high scores had been the norm all round, we hoped that our high score this time would be a little more out of the ordinary.

At prize giving when the scores were read out, we were mentally counting the number of people ahead of us. Gargh, missed top 10 by one place – 11th! But we had much improved and won our category, so we were happy. Results here. One more go at it this season! 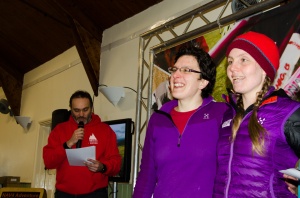 Thanks to Open Adventure (event), James Kirby (official photos), Andy Kirkland (personal photos) and everyone who made the event possible.