← Coniston Old Man Triathlon
A Day in the Lakes →

❗ Warning: too much fun alert!

After the disappointment of the weekend before in Coniston, I had had a slightly gloomy week. By Friday night my legs were still hurting and I feared for my left quad which was verging on painful. However, I had signed up for the Foxlake Tri event – relay and solo.

There was not a lot to suggest this race would suit my strengths – as each full triathlon lasted less than 20 minutes and I’m an endurance athlete! However, there were some twists. And it was organised by Durty Events, which meant there would probably be some mud involved. 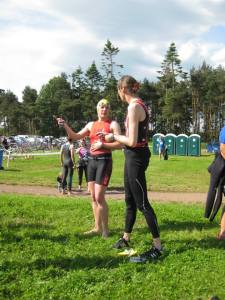 Discussing the route and correct dibber usage with Jo

The first event was a relay in the same format as the Commonwealth Games. Four athletes per team, and you all do the whole race once. The second event was a solo race with multiple rounds.

To prepare, there were a few things I had to do. Firstly, my rear mountain bike tyre was not holding air. A facebook plea produced an explanation, a remedy and an offer of a tutorial on how to fix it (sealant supplied). Huge thanks to Ewan for this, it was easy peasy and I am no longer scared of this job!

Secondly, this race was so short that time in transition needed to be minimised. This meant wearing the same shoes for the bike and run. But I had no decent mountain bike flat pedals! Glen helped me out here, loaning me a set of pedals from his own bike. I collected them from his girlfriend on Friday night and decided the pot of grease also laid out was a hint that I’d better not let them get jammed on! (as if 😉 ).

Other modifications to my usual routine included no socks and no gloves. Fortunately the recent weather and the small size of lake meant the water was lovely and warm, and wetsuits were optional (I opted out)!

Our club (ERC) had targeted this race for the relay teams, all ably organised and coordinated by Alistair. In the end we had 5 teams of 4; 20 people all creating a sea of red around the briefing area. I am not convinced the club trisuit is the most flattering design on me and my women’s specific black number is more comfy, but I wore it anyway to make sure I was identified in the right tribe!

Getting everyone together to register was a bit like herding cats, as we all set off at different times to ride round the bike course and see what it was like. We registered with not much time left before the start – and I was going first! Luckily, with a minimal transition and no wetsuit, there wasn’t a lot to get ready. In the water and I was only just checking my goggles were on properly and wasn’t even at the line when Paul shouted “GO!!!”. Yikes! I quickly got going but had missed the front group!

Getting in (I’m in the red suit)

Not to worry, I was soon out of the water, avoiding falling in the special hole just before the bank, and was through transition and onto my bike. The course was a lot of fun. A fast part by the lake, then a windy bit of singletrack through some trees, with lush green fronds brushing at your legs. Then a very fast double track section with a few big muddy puddles to catch your wheels! Finally, a zigzag up and down a bank 3 times with some technical little bits to watch out for – a tree stump, some loose ground, gravel and a slidy bit on the final turn back into the field. I had overtaken Alistair and Andrew from ERC, and another man I didn’t recognise. One of our guys was claiming ‘he had a mechanical’; to be fair, I did see him off the bike doing something with his chain!

Leading the relay at the end of the bike leg

I just about remembered to take my helmet off and was soon running. All worries about my legs had been forgotten as I wound through the woods and heard the announcer shouting “you can see the lead person flitting through the trees over there!”. I waved, thinking: are they talking about me?!

Before I knew it, I had tagged my next team mate and was under the finishing arch!

There followed a whole lot of fun cheering and watching the battle between ‘ERC men A” and “ERC ladies 1”. I passed over to Erin, who came back covered in mud from a fall only witnessed by her boyfriend in the other team (we suspected foul play!). Next up was Elise who battled it out with Mitch the whole way despite some navigational mishaps. Finally, we handed over to Andrea who got cold shock but was still gaining fast on Chris as she swam a mix of backstroke and breaststroke – and then overtook him as she took the long route round!

This format was really good for spectating; you hardly had to wait to see people between disciplines. It was also sunny at this point, which made life easier. We were neck and neck until the 4th leg, when sadly the men pulled away. But still, our girls team was 2nd overall and 1st ladies! Awesome. ERC also got 1, 2, 3 and crowded out the podium … cool. 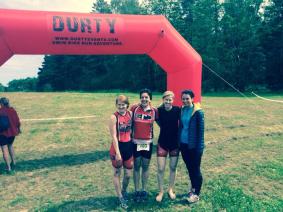 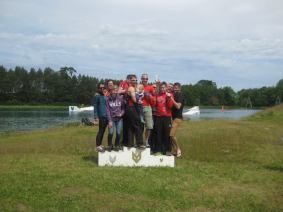 Something I didn’t anticipate was how cold I’d be even after putting a load of clothes on. Mary lent me a jumper for the day even though she was heading off after the relay. “You’re about the same size as me” she said, as I looked at it, dubious that I’d even get it on. Well, turns out I am actually a bit too large for a “Gap Kids” hoody, but I could just about wriggle in and it kept me warm nonetheless! 😀

Onto the solo race after a longer than anticipated wait (should have gone and got food instead of just a snack after all). I think Paul (the organiser) was sort of making this up as he went along. Round 1 was 4 random heats and I was in heat 3. We sploshed into the lake from a pontoon this time and I raced round with a chap called Alan. I just beat him to it, winning the heat. 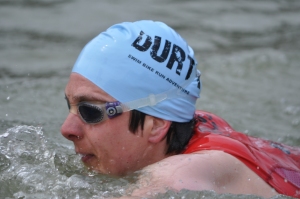 Round 2 (3 heats) and everyone was petitioning to only have 3 rounds instead of 4 (the original email said 5 or 6!). I wasn’t too fussed either way, but rain was forecast, it was all taking quite a long time and people were dropping like flies, so it seemed a sensible option. We set off and I was in a heat with Alan again. This time he just beat me to the line.

Smile for the camera!

Round 3 was the final one and we were sorted into an ‘A’ and ‘B’ final. I was in ‘A’. Alan had promised he was going to really go for it on the swim this time and I should try and draft him. I hastily got into position at the start, and I did try … but then he was off without me! I wonder if I could have hit it harder, but I’m not sure. Anyway, 4 men including Andrew from our club were in front of me as we started biking. By now it was pouring with rain and the course was a bit slipperier. I was annoyed at myself for dabbing on one corner, but it was no big deal. In the end I cruised into the finish a comfortable 4th place, and 1st female.

Since I am a numbers sort of person, I was pleased to see this evidence from the day:

After all these shenanigans we finished 2 hours early and I was even able to get a lift back to town with Andrew, which meant I could fit in a long-overdue visit to my pals for dinner. It was worth it even though I had already paid for my train ticket back. I can only apologise to his wife for all the mud that went into a pristine looking car …

Full results here (relay) and here (solo) and many thanks to Louise Smith and Andy Upton for the photos.

← Coniston Old Man Triathlon
A Day in the Lakes →