This was a race where my legs rebelled against my requests!

When I first considered this race, I was going to make it a ‘B’ race. This means it would only be of moderate importance. However, there was a race I wanted to use to train for Itera on the same weekend as my preferred race, so I changed this to an ‘A’ race. This meant I was targeting it. I generally only have two A races a year (coach’s instructions).

Everything had gone to plan in the lead up to the race. I had been doing run training on a consistent basis and managed not to catch any bugs. 10 days before the race I went down on the train to ride the bike course. What a shock to the system! It was definitely tough. It was good to know what was coming up though, and it spurred me into resting well and saving every gram I could to make those climbs easier.

Fast forward to race day and I had done a lot of prep. All the extra kit I had for the recce was left in the tent (multi-tool, mudguard, mini lock, phone, coat etc). I had even bought a smaller, lighter seat pack and had a haircut on Friday! In total I think I was ready to start the race carrying nearly 2.5kg less 🙂 .

Before the start of the swim – I’m the one waving!

This was my favourite and most successful part of the race. The water was pretty warm compared to my last open water swim at Portobello (which is in the North Sea and generally colder than English lakes 😀 ). I was striking out alone after the first 400m or so as the people I was drafting dropped off the pace and I couldn’t catch the lead group by that point. We had to do two big laps. On the return leg of each I had trouble sighting anything as the marker was so far away and I couldn’t see the swimmers in front. I felt I might be veering wildly off course, but by sighting off a small headland, soon enough the buoy came into view.

Transition 1 – run across a field and up a hill!

I even managed to eat a banana on my way up! Other than that, the transition was unremarkable.

There is a lot of climbing on this course. I generally like climbs, but here two of the hills are very steep (up to 30% in places) and are not much to my liking. I wobbled up Wrynose and completely missed Chris Boardman, who was apparently giving everyone a little cheer!

Hardknott pass, winding up to the horizon

My target times were based on a 70km course and I also got held up at a red traffic light for a little while.  So my time was actually OK compared to target, but my legs did not feel ‘zippy’ like they do when they are good. This is hard to explain, but when everything comes together and I ask my legs to do something hard, they just respond and I feel great. On this day, right from the first proper hill I could feel that things weren’t like that!

I had to fight and had low moments when I even thought ‘what if I just stopped?’ (Of course, I never would!). On the plus side, I rode my own race and didn’t respond when both Sally and Bonnie came past (I expected these two girls to be contending). I also ate well, snacking on the feast of various treats I had prepared on Thursday night. 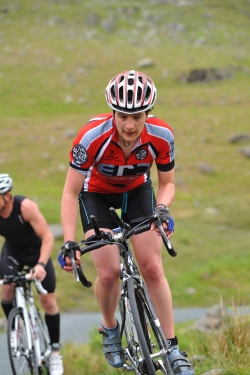 However, by the end of the ride I had slight stomach stitches and my back was very sore. I think this was from riding such steep hills out of the saddle, which I’m just not used to. I had kept stretching out on the bike, but it’s not so easy to do this effectively when you’re on the move!

View of what we had to run up and round

My plan was to finish the bike in my target time feeling like I had something left for the run. Unfortunately, given the ‘disobedient leg’ situation, I started the run feeling pretty tired! I set off anyway, and soon got hot, really hot. Luckily, I recognised the signs from the 2 day in Wales last year, when I got a sort of heat stroke or heat exhaustion from running too hard in hot sun. At the first stream I could easily reach, I stopped and scooped cold water all over my head and neck and face and arms. I also started drinking a lot. As I reached higher ground there was a wind and it was a bit cooler. I was very grateful for this!

Apart from my problems with the heat, the uphill was as hard to get up as the ones on the bike. I felt like it was Wrynose all over again! My legs were burning, but I was accompanied by a couple of guys who kept me motivated to carry on pushing. As we reached the ridge, a few people caught up and I stumbled and nearly fell hard, only just saving myself. This happened twice, then I realised that my brain was probably addled due to lack of glycogen. I hadn’t been eating for a while due to the slight cramps coming of the bike. These had now gone away so I munched some more snacks.

I had been in 3rd place for several hours, but on the descent of Coniston a girl just flew past me. She cheerily asked “is your ankle OK?!” I thought, er no … this is just how I always run down hills! There was nothing I could do to respond. I wanted to stop trying then, but didn’t!

I’ve got nothing left in the tank!

I felt the run had been a bit of a failure, as I was well off my target time. But the girl was the only person to pass me on the tricky part of the course, and the results later showed that my relative placing for the run stage overall was actually better than for the bike. This is very rare for me and suggests I was either having a really bad bike, or a better run than it felt!

As I got back to lower ground, I started cooking again, but I had no water left and there were no handy streams so I had to just tough it out. I was determined to run all the way, including the uphill finish which is a sting in the tail! As I crossed the line, my legs crumpled underneath me and I am rarely so relieved to be able to stop.

I was left feeling a bit flat after this race, as I put so much in but didn’t really enjoy it and didn’t feel I had performed to my potential. I also can’t pinpoint any clear reason for this. These things seem to matter more when you’ve decided a race is important! However, my coach said “you only fail if you fail to try”. I certainly wasn’t falling short in the effort I put in. Afterwards I had sore legs right up until the next weekend. This is certainly one race that you don’t bounce back from two days later!

Finally, don’t worry as my next post will be all about a race where I had a lot more fun :D.