A strong performance from me, but only good enough for 4th place. I have to remind myself that this still counts as a ‘short’ race! Plus, a little discourse on the importance of how the women’s race is managed in a high profile, televised event …

So I was down in Wales at my dad’s house to do the Sandman race again. Last year I had a terrible time; I was fatigued after 5 days of non-stop racing in the Terrex, I had a sore knee, it was wet, windy and cold, and I got a puncture.

Mostly my aim this year was to have a better time of it :-).

Andy was also racing, and I had promised him that this course truly did suit him. He was targeting it, but managing to stay relatively calm beforehand.

After I had set up transition, the TV crew wanted to do an interview. I duly obliged, and then took the opportunity to speak to them about parity of coverage with the men’s race (it had been almost non-existent for the Slateman earlier in the year). They were sympathetic, but said it was hard to get film of everyone on a limited budget. 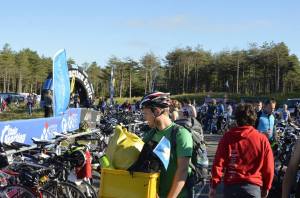 Hmm, I’m sure I left my bike here somewhere …

Into the race, and there were two waves. I have no idea how they were split, but there were a mix of men and women in both. We had a long walk down the beach to the start and I almost left it too late. Just a scrambled dip in the sea to get wet and check my goggles before I had to run out to get onto the start line. It was absolute mayhem swimming out to the first buoy and turning left along the shore, but I survived then concentrated on overtaking people. I would need to be much more aggressive to get a good start!

The transition went well and I was soon out biking. It was lovely and warm this year – so no need for an extra top. It was also much less windy, which meant there were far fewer problems with people drafting (cheating). I got mildly annoyed with a couple of men who kept overtaking me after I had overtaken them … but this is fairly normal.

I worked consistently hard, alternating drinking from my two bottles, one with water and one with Torq solution. I got a bit of a shock when the lid flew off one of them! Miraculously, I somehow kept the bottle in my hand, the lid in my teeth and only some of the drink sloshed all over me. I was also regularly chomping on a Clif bar. I had experimented with opening the wrapper, breaking it into bits and putting it in my trisuit pocket under my wetsuit. This would save hassle later in the race. It worked OK, apart from being slightly soggy on the outside!

No girls overtook me, but I didn’t pass any either. I was very pleased to see that the film crew might have taken on board some of what I said earlier. They came past filming me for a bit, then went up the road, presumably to the two women up ahead and the men. They also filmed me as I did my transition to the run, so I tried hard to play it cool 😎 .

The run started off with some fun on a new boardwalk. I was pleased that only a few men overtook me. But it was very hot, and the sun was scorching. How could we be running through woods but not have any shade?! I remembered from last year that it was flat for a while then climbed uphill to cross a road. That’s where the drinks station would be at 7km. I felt quite slow but kept plugging away. I had eaten two gels and was ready for a cup of water at the drinks zone. Only 3km to go, downhill, but this is where it got all sandy!

Finishing off the run

In the end, my run time was much better than last year, but slower than I had hoped. I knew I had worked hard though, as I remember telling one of the marshals that the run was ‘like torture’ and I collapsed onto the floor at the end for a breather. The cameras were there again and the interviewer was pleased with my dramatic finish! The announcer shouted that I was 3rd female. Time for another interview.

But I was keeping my eye on my watch. I knew the second wave had set off 10 minutes behind, and were wearing different coloured numbers. After a few minutes another girl came in with a green number. I was fairly sure that meant she was 3rd and I was 4th. A bit later, they announced that this was the case (at least they didn’t leave it until prize giving this time).

I bumped into the camera crew again and they were disappointed for me. “You were demoted!” they exclaimed. I think now they understood why I was frustrated that the women had been split into two waves.

I was beaten fairly by over 3 minutes. I had a better bike leg and on paper was ahead at the start of the run. Personally, I like the excitement of head-head racing, of knowing where I am in relation to the rest of the field and racing tactically. The psychology of competition helps me produce more than I am ever capable of in training. The best example of this in racing this year was at the Trident Tri in Ripon. I could see the leading and chasing women at every out and back point and remember riding like a crazy woman with fear, thinking I had to get as much of a cushion as I could for the run! It worked.

The organisers here put on a race with a great route and do a good job of attracting all sorts of people from beginners to elite. They are making the sport accessible and many competitors were taking it on as a serious challenge. It is just my opinion that the racing at the front end would be better if they put all the women into one wave. It would also make it much easier for the TV crew to create fair coverage. They now have lots of footage and finishing interviews of places 1, 2, and … 4. This makes it hard for them to put together a good story for the women.

Jane Hansom won, finishing 10th overall and miles ahead of me. Rhian Roxburgh (clear winner at Slateman) was 2nd, and Helen Talbot 3rd. Results. All three will be racing at the Snowman, so I’ll have my work cut out to break my Always Aim High podium duck for the year!

Me before the race. See how sunny it is?!

I didn’t expect Andy to be much slower than me. He started in wave two, so I ran back out along the beach and eventually saw him coming in. I enthusiastically made a loud noise with a clacking hand and cheered him on. He didn’t seem too happy though … oops. I refrained from running next to him and instead let him get ahead a bit, nipped up the sand dunes and met him at the end. He was a wreck. He hadn’t eaten or drunk nearly enough and seemed to have mild heat exhaustion. I sat him down and got him drinks and bits of orange and biscuits. But he was also bitterly disappointed with his race so it took a while for him to recover his usual buoyant mood. Here’s his report. I think I do deserve several gold stars though. I managed to refrain from saying ‘well, I did try to tell you that one bottle of water on the bike and two gels would not be enough’ …. at least, until a few days later! 😀 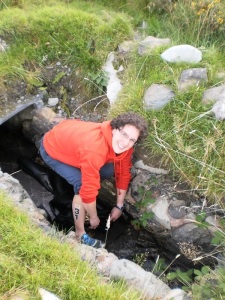 If your host is on a water meter and has a septic tank, then you can improvise with post-race wetsuit washing!

Thanks to Andy Kirkland for most of the photos.