Uswim Salford and Dundee Half Marathon

July and are August are busy racing months for me this year! So you get two races for the price of one in this report :-).

A few weekends ago my boyfriend was swimming a 10km open water race. Yes, that’s 10km swimming. I don’t know what had taken over his brain when he decided this was a good idea. After having had to drag him into the water literally kicking and screaming, in just a couple of years he has turned into a swimming fanatic.

Nothing wrong with that, but even I thought 10km was mad. Anyway, he needed a supporter and Uswim were running a 1500m race starting at the same time. So I entered that one on the basis that I could swim, get out and be ready at the feed station when Andy first needed me.

It was a bit stressful getting to the start because it was HOT. And I was desperate for the toilet. And there were queues. And Andy was anxious. But it all sorted itself out and soon I was in Dock 9 at Salford Quays ready to go. I was on holiday after the 2 day adventure race and there was no way there was any room for a wetsuit in the packing, so I was ‘doing it skin’. It was so hot I was quite glad!

The hooter went and I practiced drafting and swimming hard and sighting. In 27 minutes I was finished (think the course might have been a bit long). 8th female, though also only beaten by 5 men! The results didn’t say who was in a wetsuit or not (wetsuits make you faster due to extra buoyancy).

The feeding and lap counting platform

I threw a T-shirt on and ran round to the floating platform to support Andy. The long course swimmers were doing 10 x 1km laps. For the next 3.5 hours I handed out snacks and drinks and took photos. The bits of sticky iced bun were well received! As was the coconut water. I also took to helping some of the other swimmers and the lap counters on the platform with me. Time passed quite quickly – nipping back for the prize giving for my race and watching the race developing at the sharp end.

The leading male almost lapped second and third, who were having a private battle. The leading female only opened a significant gap after about 7 laps. It was great to be cheering and encouraging people.

As time went on the locals started getting in the way, jumping off bridges and generally messing around. Andy was the last finisher not to be stopped before the end. A superb 3h57! He didn’t seem to understand why he was tired when he got out and the next day. Strange.

The following week I decided on Tuesday to enter a half marathon on Sunday. It was a bit of a scramble to organise a lift with a club mate and get entered before it sold out, but I was sorted. This race was in preparation for the Aberfeldy middle distance triathlon, where I will have to do a half marathon to finish off. The last time I ran this distance was in 1999, in a race in Germany. Back then I was ‘a runner’, but afterwards I didn’t run for 10 years. I hoped this one wouldn’t have the same effect! 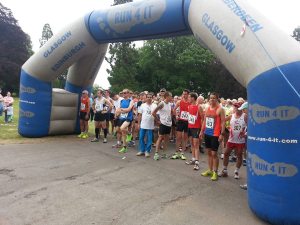 I’m just tucked in on the far left about 3 or 4 people back.

I got picked up early, we drove over, were practically first to arrive and had ages to get ready. Running races are funny … no kit to get sorted! After several trips to the toilet I was ready and waiting near the front. I had read that it could get congested on the initial hill through some woods and I didn’t want to get held up. The people near me were all discussing their target times. I subconsciously took a step back, but trod on someone’s toe and had to stay where I was! In the end, it was fine. We started, I ran.

This was sort of it the whole way round! It’s so long since I have done a running race not requiring the use of a map, or watching footing over uneven ground, or with marked changes in speed. I felt like a metronome as my legs turned over and my arms pumped. At first I wondered if my mile splits might be too quick. But I kept maintaining them – my middle 3 miles were identical speeds, to the second! I drank at drinks stations and ate two gels on the way (keeping hold of my wrappers, unlike some people).

Near the start. Testing gel holders on a race belt for the first time.

I kept thinking, is this even real? I was having a sort of out of body experience. The mile markers kept ticking by. Suddenly I was going up a hill at miles 9-10. Then a downhill mile, which was inexplicably my slowest. Then the final run along the shore with a tailwind for the first time all race.

Actually, I was starting to feel tired now, and my calf was sore. But I was nearly there and kept going. I saw the clock as I approached the line: 1:34 and counting – quick! I can get under 1:35! I also tried to outsprint the two guys near me to much cheering from the marshals and crowds :D. The marshalling and local support had been excellent all the way round.

At the end, I took my shoes off and found big blisters on my poor little toes – oops! But the sun had come out (luckily it had been much cooler than recent days in our heatwave) and Peter (who had brought me there) and I relaxed and waited (and waited) for the prize giving. He had come first male supervet in 1h23 – fast!

Next up: two standard distance triathlons two weekends in a row!