Only 5 days after my first race of the year, it was time to go again! This time I was in Yorkshire, doing an Open 5 on the North York Moors, starting near Scarborough. The chest infection had pretty much cleared up, so apart from doing almost no exercise for a couple of weeks (extended ‘taper’?!), I was ready to go.

I was racing with Lucy for the second time in this series. We stuck with the same format as last time for kit, navigation and running first. We cut it very fine getting to the remote transition in time to start before the 10am cut off! It was warm and mostly dry all day, but some of the paths and tracks were very muddy. 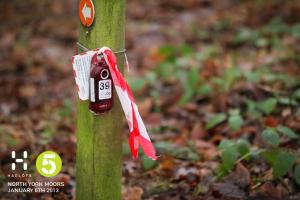 Controls – these are what we’re after!

Setting off on the run I felt better than last time. It seems some extra running before Christmas might have made a difference. 😉 Lucy did a great job on the navigation. In the woods we had some interesting route choices involving steep scrambling up and down banks. I didn’t know I would literally have to ‘eat dirt’ as I trailed behind up one section! 😀 We were aiming to be out for 2 hours on the run, and after about 1h30 I was beginning to feel it in my legs. Lucy had brought a bungee tow rope this time. She said “yes!” when I asked if she was still feeling frisky, so I cheerfully hitched on for the last section!

Going so fast it’s all just a blur!

Into transition after exactly 2 hours and then we were off on the bikes. It felt wonderful! My joy was short-lived though, as we were soon pushing up a long, rocky and steep track. I hadn’t found my bike mojo yet and felt sluggish with the navigation. Descending through the forest I also took a tumble which knocked the air out of me. It was probably a good thing that Lucy was still heading downwards, as I didn’t have time to sit around feeling sorry for myself! We got to a road, I pulled myself together and felt good for the rest of the race.

As we headed up the final big hill on our planned route I realised we were covering ground a lot quicker than usual. We added in an easy control and carried on. The funniest moment of the race was approaching a ford but not being able to work out where the road went afterwards – because it looked like a river! Two pairs of very wet and soggy feet later we emerged and carried on our way.

At a final junction we had a choice – get back 20 minutes early or take a risk to do an out and back for 15 more points. Despite saying we wouldn’t take silly risks after last time, we went for it. It was all on fast road and I couldn’t face getting back that early! 🙂 This was a really inefficient way to get this one. If we had realised sooner how fast the course was, we should have collected it and another nearby control much earlier on.

This time the risk paid off and after a lung-busting dash for the line we were back less than a minute late – only 2 penalty points. We were pretty chuffed and felt like it had been a good race. I thought we had worked together well and we got 553 points.

At prize giving we found we had come 2nd. The winning pair from the Pentlands race (Jessica and Rowena) had scooped 575, which was a fantastic score. We were beaten by a better team on the day! But it did leave me thinking … could we have done more and if we meet again do we have a chance of winning?

Well, we knew we had made a small nav error on the run (costing 1-2 minutes). I made a tactical mistake on the bike, probably collecting two controls in the ‘wrong’ order – the distance was the same but we did extra climbing (I know, I just can’t resist a good hill!). After looking at other people’s routes I can also see a more efficient route to one run control (800m shorter – that’s 3 minutes!). We should have committed to two of the bike controls earlier on – saving ourselves 2km and collecting an extra 10 points. And I think our transition could be a couple of minutes quicker!

Perhaps if you add all of this together we could squeeze out that 20 extra points. But hindsight is wonderful and it’s almost impossible to have a 100% perfect race. The others still got back 14 minutes early as well! I think we will just have to get faster! 😀