Lucy and I had a plan. A plan to race the Open 5s together. Until last Wednesday that wasn’t going to start until January though. I was going to do the South Downs Open 5 solo as a warm up (against my better judgement about the practicalities of travel to these far flung locations). Lucy decided to come last minute – and suddenly I was pairing up!

After a ‘slightly arduous’ train journey to Leeds on Friday afternoon, I met up with Dawn and Tom and we set off for Liphook. A smooth run through and we ready for a nice ride round the area on Saturday morning.

Well, two of us were ready and one of us (Tom) wanted to sleep in and needed encouragement to come out and play! Then one of us (me) decided to pop into Liphook Cycles to get some new cleats (my foot kept flying off the pedal). I’m glad Dawn told me to change them right away – as it was practically impossible! After much drilling, rummaging in boxes for shoe plates and tutting at the state of my old bolts, the new cleats were safely installed by the mechanic. I thought for a moment I was going to have to buy new shoes on the spot! Many thanks to the guys in the shop who helped me out :-).

Finally we were on our way. We started with a nice pootle along a bridleway which was promising in parts, but interrupted by sticky mud holes. This was followed by a lovely ride up the only hill we could find. Even Tom was heard to say “it isn’t much of a hill”, though you wouldn’t know it from the complaints that followed later! Highlight of the ride were the Belted Galloway cattle, christened ‘pandas’ by Tom.

Race day was bright and cold. It was exciting to be racing as a pair. Number 1s on our bikes and legs. A good omen?

I went through my usual planning routine for the bike, with Lucy breaking from her traditions to do it with me! I wanted to look carefully as the map was covered in different rights of ways and not-rights of ways. Lucy did most of the run route planning and we were ready to go.

We ran first – I prefer it this way though Lucy normally goes the other way round. With five more races to go there’s time to experiment. Straight out from the start we were sprinting! Yikes, I was thinking I wasn’t sure I could keep this pace up … then we promptly got lost!

Who has done / said these things before?

After narrowly avoiding getting sucked into ‘crowd indecision’ with everyone else who was lost, we nipped through a gap in the trees marked ‘serpent trail’. I knew it should go past one of the controls eventually, as we had ridden some sections of it the day before. Then we were saved! An info board! With a map and a ‘you are here’ arrow! As Andy will tell you, I love info boards and have never loved one as much as this.

After a 20 minute / 2.5km detour we were on our way again and Lucy navigated the rest of the run faultlessly. I huffed and puffed behind her and felt guilty for asking her to slow down sometimes to let me drink / eat / breathe. I did well at being trusting as I never looked at the map once we got moving, though I didn’t have time to anyway!

We timed arrival into transition perfectly – we left after exactly 2 hours and started bombing it along a road. My legs felt the run in them when we hit the first hill, but I soon recovered. I loved going up Blackdown hill on the firm trails and racing down a fast descent. The rest of the ride was nearly all on road, punctuated with little off-road forays. This suits me from a race point of view, though it can be less interesting.

We finished the riding on a similar note to the way we started the run – with a mistake! I was looking after bike map reading. We wanted to squeeze in an extra 15 pointer and get ourselves over 500. We were also lured by the control location … ‘Titty Hill’. Unfortunately, I under-estimated the distance to get this and get back. On reflection, my route choice between the last 5 controls was also sub-optimal by about 3km.

How is Lucy smiling?! I feel sick!

We ran out of time 3.5km from the finish, just after we had been reduced to pushing our bikes up a road bit of hill. I had missed the fact we were on the Roman Road, and couldn’t savour riding through ‘Shufflesheeps’. My legs were empty, I felt a bit sick and I longed for the finish line. I told myself since giving up is never an option, the only thing for it was to turn off the brain, urge Lucy on and get us up to the end as soon as possible. 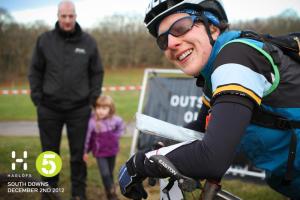 Glasses all steamed up and still not recovered!

I was grimacing as we approached the finish banner and was glad it was over! 14:25 late = 45 penalty points giving us 465 overall. Slightly disappointing. However, with two significant errors it wasn’t so bad … and you never know how anyone else’s race has gone until you get the results. So we were delighted to find we had won the female pairs category. A lovely purple Haglöfs fleece in the prize bag made my day. I even found energy to help push the car back onto the road for a bump start when we found it with a flat battery :D.

I feel like we have room to improve and could get stronger as a pair than we were solo. All fired up for next time now!  Scarborough, January 2013 – the date’s in my diary!

Here is Lucy’s report.
And the full results.