Andy has a new-found love of both running and adventures in the hills. This had lead him to enter the Kendal Mountain Festival trail run, organised by our friends at Open Adventure. At first I was just going to watch – I have had an iffy knee since the Terrex. But then I decided that because any running I have done has made the knee no worse, I’d rather take part than travel all the way to Kendal to hang around watching!

After an early start, our train from Manchester arrived 5 minutes late. Doesn’t sound like much, but we were cutting it fine anyway! We had to run quite fast to the registration point, with me navigating from a map in my head that I had tried to memorize the previous night. No worries, we got to the back of the queue before 10:30 – though not the front! 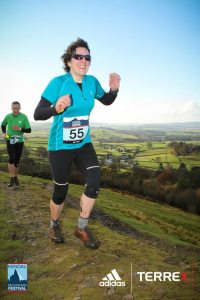 Me on the top of the hill having fun!

Then Andy wanted to ‘warm up’. I stood near the start watching him do his stuff looking pro in a proper running vest from his new club. He said: “If only you could see what was happening to your VO2 right now”. I said: “Running around now just means less energy for the race”! 😀

The crowd seemed reluctant to move to the start area, so I positioned myself on the second line. I wasn’t going to begin at a disadvantage! The route was flat for a few km, but muddy with pungent smells wafting over from the fields. A couple of girls came past who I tried to hang on to, but in the end this race was just for fun and I wasn’t motivated to kill myself too much! I decided to wait for the hill.

Turns out that sneaky Andy was also tucked in just behind me. I have a general ‘don’t look back’ policy (if someone in front of me looks back, I know they are worried and it spurs me on), so never knew it. He was thinking about flying past but was biding his time … too late! As soon as we started going uphill I dropped him – ha ha!

The weather was gorgeous and sunny. I thanked the marshals, checked the views and told myself I wasn’t going to walk a single step, no matter how steep the last little bit of hill got! I could still see a couple of girls just in front, but I wasn’t making any ground even on the ups, so I left them too it. On a very slippery bit of descent my shoes had zero grip in the mud and I found myself on the floor. No damage done, though just then another girl came past! I urged her to catch the next one as we hit the road. The sole of my shoe is falling off and I keep delaying getting new ones (so expensive and they don’t even seem to last 6 months). It slapped on the road as I ran. 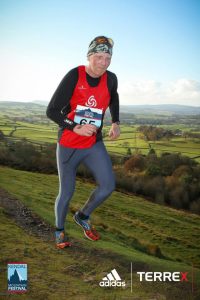 Andy … taking it more seriously. Or is he just more cool than me?!

More fields, more mud, back under the railway and suddenly rounding the last bend to the finish gantry. Hurrah! Andy came in 5 minutes later – a massive improvement on his previous off-road ventures. It was a moderately hilly and very muddy 9.8km. I was 6th female in 51:55. My knee complained a bit but felt better afterwards. The only trouble with doing events like this is that my legs get so stiff and sore the next day! Maybe 30 minutes a week run training just doesn’t cut it.

The day was rounded out with a visit to the Quaker Tapestry veggie cafe for lunch and a wander round the shops. We bought homemade marmalade and lime curd from the market, spinach and feta bread from an enthusiastic Italian and VPud from Booths for Andy (he just can’t resist). There was still time for a sojourn to the Chocolate House for some fine hot chocolate, cake and a bar of my favourite chocolate that my local stockist has dropped (I can’t have been buying enough). We finished with a trip up to Kendal Castle before our train home.