I was surprised how many people I spoke to didn’t know where the Quantocks / Taunton are when I told them I was going to race there. Then again, it’s a full 425 miles from where I live, or 515 if you take my route via Leeds. It’s near Bristol in SW England.

I was never going to do this race until I hatched a plan which seemed entirely reasonable at the time. I would travel to Leeds by train (changing at York so I could get a cheap ticket), stop off with the lovely Dave and Ruth, get a lift with them to the race and then reverse on Sunday / Monday. The East Coast man who got my bike off the train in York gets double brownie points for admiring my bike! 🙂

The Quantocks, courtesy of James Kirby. Next time I am going to bribe him to take a picture with me in it. I am sure his lens will be fine!

I was back to racing solo again. This time I didn’t have the luxury of riding in the area beforehand, though Dan gave me some good tips and I whiled away the hours on the train doing intensive map study.

I had to have a wee rant about dinner in the pub the night before the race. Whilst the others tucked into quality meaty fare, the one veggie option was a rather pathetic slice of goat’s cheese on a tiny square of filo pastry with chutney on top. Served with two measly new potatoes and a load of veg. No sauce, no carbs, no choice. Grrrr!

I’ll say now that even setting aside dinner, I’m beginning to think that me and January races don’t really mix. (I had a bad time of it at Sutton Bank this time last year). The weather for this one was benign, and the run actually went OK. My leg didn’t hurt, I navigated accurately and I got back in 2 hours after a 15km romp. Must just work on those uneven downhills – there’ll be plenty more of that come June. I also had a fantastically quick transition – in and out in 2:19 and 10th quickest – yay! 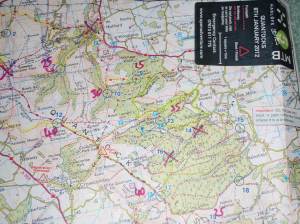 The Map of Doom!

Sadly, something went awry shortly after! I made a mistake navigating to the second bike control. I knew something wasn’t right but had to stop and check several times before I figured out what I’d done. In hindsight it should have been blindingly obvious – a steep downhill into a valley vs. an undulating traverse round the top?! After getting back on track I started to ride uphill only to be nearly thrown from my bike as I got chain suck. I didn’t have my computer in this race either as I lost it in Bacup – I now realise how much I use it to estimate distances between junctions and controls. All of this seemed to combine to make me slip into old bad habits of a) riding too slowly and b) over-checking the map. The chain suck also meant I was super cautious on hills and grinding along in the big chainring as I wallowed in mud.

Sometimes things just don’t click and my race head was obviously still indulging in the Christmas cheese and port.

Despite all this, I do remember rather enjoying the descents – so it wasn’t all bad! Somehow, even though I felt sick by this time, my legs must have suddenly woken up between the last two controls as I came in 3rd and 1st fastest on the last two legs. What a shame it was about 3 hours too late! I finished more than 8 minutes over time (meaning I got 18 penalty points).

I came 2nd to Lucy Harris, who had a good first race in the series. Funnily enough, we collected exactly the same controls, though in a slightly different order (and she did it quicker!).

Coming back in the car I had great time chatting with Dave, but we got in after 1.30am. After a long day of racing, travelling and 5 hours of talking I needed a decent sleep, so it was unfortunate that we had to get up at 6.30! Getting over-tired and run down in the winter is never a good idea, and sure enough by Tuesday I was fully knocked out and off work sick …

Roll on February, I will approach the race with renewed energy and verve, and with my fingers crossed for some epic weather – it suits me better! 😀