In the Bryn Eglwys quary, we got stuck for about an hour. Back at home, with the help of my dad I overlaid our track on the map. It looked like this:

Our route in grey. We came in from the NW and eventually left to the SE past the fords

Our original excursion, to the south-west, is actually part of the ‘Quarryman’s Trail’ – a tourist route that goes round in a loop.

The second foray up to the wall near the falls was a lovely clear path that stopped abruptly.

I think we did find the start of the official right of way, right next to where we took this path, and marked by an arrow you’d see if you emerged from the opposite direction. There didn’t seem to be a way through behind it though, it was all overgrown.

Geograph is a great source of photos and these two (originals here and here) do suggest the route at least used to exist!

View back across the quarry, from the footpath further up the hill (south)© Copyright John Lucas and licensed for reuse under a Creative Commons Licence

The junction bears no resemblance to what we could see on this night! As well as the absence of a stile, signpost or path, the track is also now wide and large, probably changed when they did some felling of trees.

It’s probably a good job we didn’t try to just bash across the quarry. Apparently it is still quite dangerous in the area where there was a big collapse in 1946. This was the end of active slate extraction at this site.

You can see that the track we finally found our way out on isn’t marked on the map, though it eventually joins one that is. The first part we went across is shown with trees, which are no longer there. The route is an old packhorse trail, used to carry away slate when the quarry was first operational and before the railway was built.

You can read more about the site and the railway here.

Further up the track just before we re-entered the woods, we crossed a fine bridge. I remember it well as we paused here. I think some people refilled their water bottles, whilst I was probably taking another ‘comfort break’! 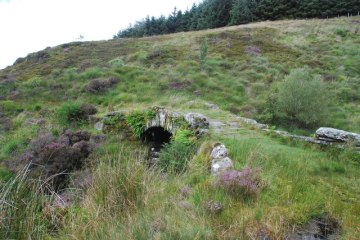 Packhorse Bridge, where we left the ‘quarry nightmare’ behind! © Copyright Martin Keegan and licensed for reuse under a Creative Commons Licence

I’d like to go back here in the daylight and see what was really going on. I think the walk up through the woods just before this would pretty cool to spend some time at too. Next time!