This was the third year for us back in the Isles of Scilly. I don’t repeat races more than twice very often, but this one is special, and Izzy swayed me (it didn’t take much!).

Like last year, we put it in the middle of a week in Cornwall, reducing travel hassle as much as possible and enjoying being tourists somewhere hot, sunny, friendly and full of bees and butterflies! The flight over in an 8-seater plane was also pretty exciting.

I went into this race with a totally different vibe to normal. It was our first race of the year, I wasn’t sure how well recovered from UTS50 I was and we had no concerns about placing, points or qualification. Our plan was to race our best but to enjoy it too! No time targets in hand, except for the cut offs. After checking into the same B&B as last year and getting over panics about where to eat every night (the biggest stress on the island), we were ready to go.

Our private beach one afternoon

It was hot again, but we knew we could handle that from last year. We didn’t rush on the first run up the road. I had inspected the line for the first swim both from land and boat, having got it a bit wrong last year. No better this! Doing what I thought was careful sighting, I ended up with a mass of seaweed and a rocky outcrop between me and the landing point. I was pretty sure getting out and running over the rocks was against the rules, so we had to dogleg round and I gave up working out where to go, just following the line everyone else took.

On exiting, we had a mass of seaweed draped all over the towline! A short run and we were back in the sea. This took much longer than last year as we were going directly into a strong current. When we got out I was very cold, but knew it would be a matter of minutes before I thought the opposite.

And so it went on. The support this year was perhaps even better – if that is possible. The race is like a tourist event on the islands, with the Tourist Information handing out leaflets explaining what it’s all about. Everywhere we went, we were stopped for a chat about it. People we passed were applauding and shouting out, telling us we were awesome … I felt it! 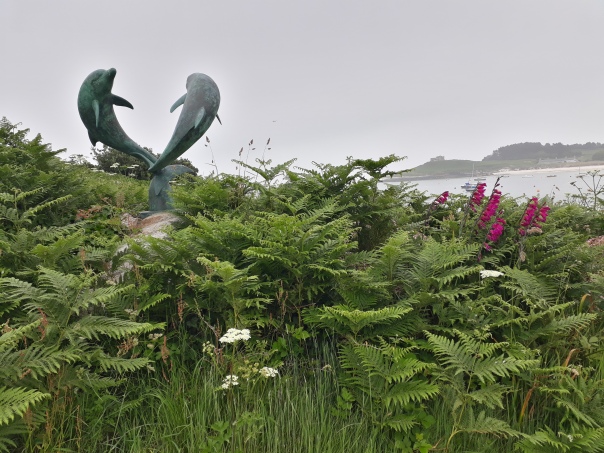 Dancing dolphins on Tresco, just before a swim entry

We were warned of some currents on the shorter swims, but they didn’t seem too bad and we didn’t get stung by jellyfish this year. The two longer runs were getting hot, but we pushed on through and finally faced the last long swim back to the ‘mainland’. The marshals told us the tide was slack… a relief! Top tip if you do this race – a good sighting point (in the absence of crazy currents) are the trees that look like giant triffids on the horizon – aim just to the right of those! I never saw the buoys until we passed them, but our line was pretty good. The landing was in sight but never seemed to arrive for a long time. My arms were just about dropping off as well.

Time to warm up again on the final run. Izzy had her ‘traditional’ tumble, nothing too serious, and we stopped at the feed station to pull down our suits. On we went, to and fro with some other couples we’d run with on St Martin’s as well – we were better swimmers! The last run is still one of the longest, but just doesn’t feel it. I think it’s because you know the end is close, and you’re back into all the crowds of support.

We both managed a sprint finish and after a while I was happy to get up, collect a veggie burger and amble back to the BnB to eat it in the sunshine, stopping for some chats and to cheer other racers coming in on the way, of course 🙂 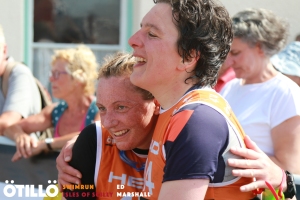 Getting my breath back 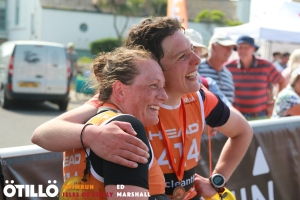 We were only a little slower than last year and some of that was down to the swims. However, I didn’t tow as hard, so we reckon Izzy was faster! I think the effects of the ultra still lingered – easy to underestimate the impact of a race like that. We were 7th women’s team – a reflection of the ever increasing depth of the field. 42nd overall out of 117 starters, which still seemed pretty reasonable 😉 Results here.

We had a lovely rest of the week and can offer tourist suggestions if needed! We got very lucky with one final swim, through Zawn Pyg … nothing to do with swimrun but perhaps the most (or second most) exhilarating swim I have ever done (the other was one of the swims at Ötillö the first year we did it). Perfect end to the holiday.

Zawn Pyg / the song of the sea – as we approached

Looking through the ‘eye’ from above 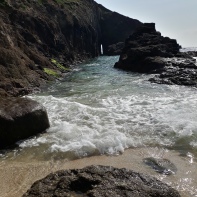 After checking the area out, we swam along this channel, through the cave and out the other side! 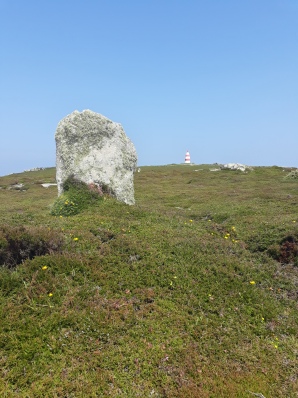 Another standing stone – with a face – apparently 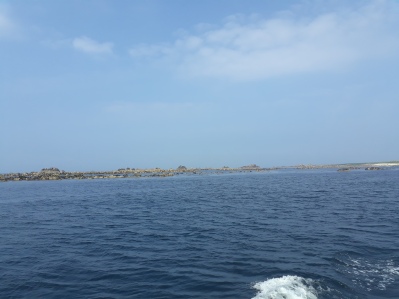 You can see why they get shipwrecks here…

I find all the best footpaths. Land’s End.