The news was announced at a long-forgotten time back in the winter. Ironman was coming to Scotland for the first time, and the race would be a 70.3 in Edinburgh. 70.3 denotes the total distance in miles, also known as ‘middle distance’: 1.9km swim, 90km bike and 21km run.

Pre-race pose … don’t want anyone to miss me on the course!

I was immediately tempted because I knew it would be big, I like doing ‘firsts’ and I knew one of the organisers. On the other hand, I normally go for wilder races than this! After some short deliberation, I entered. If it had been a full Ironman (twice the distance) I’d have had to think harder, but as it was I thought I could fit it in.

During the winter and spring I tried to ride my bike more. I did two ‘warm up’ races, a sprint and a standard distance. On both I was disappointed with my bike speed and with only 6 weeks to go I knew I had to make up ground! Turns out it’s harder to fit in all this extra bike riding into my already full swim / run schedule than I imagined. However, fitness was not really the issue. The biggest problem was learning to be comfortable on my time trial bike.

As race day approached, the forum was going into a frenzy with people talking about the race and asking hundreds of questions. I had a lot to do at work and felt a bit stressed by everything! Although the race was on Sunday, it all started on Friday with registering and getting all my kit together. Saturday was spent leaving bags of kit in various places and attending the compulsory briefing.

On my last ride, one of my tri bars had moved a bit when I hit a pothole. Andy wanted me to get it fixed by the mechanic, but the queue at the bike drop just wasn’t moving. I got more and more anxious until I abandoned it and racked anyway; I thought it would be fine. This meant a less meticulous preview of the transition area than I’d have liked, then off to do the practice swim. I was only doing this to try the course for real, but the buoys were in random places in a loop that was very much not 1.9km. Fun waves, but there was already talk of a shortened course.

Great view from the swim start – the finish is over there! 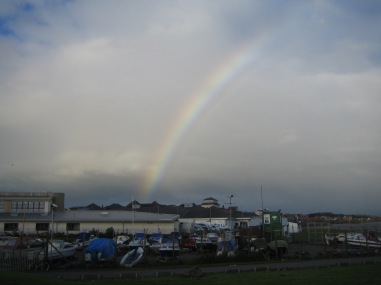 Rainbow at the start – a good portent?

It’s a long wait in the toilet queue

Getting into wetsuit half asleep still..

Race day dawned with near perfect conditions for me – strong winds to make it a bit tougher, but no rain to upset my bike handling! Izzy picked up myself, my mum and Glen at the crack of dawn and off we went. Straight into the toilet queue where we learnt that yes, we would only swim 950m. Time dragged on until I did a short warm up and went to get in the right pen. Where was the right pen? In fact, where were the pens?! I am very much unused to such large race fields. There were about 1600 starters.

I found someone else in the club who swims at a similar speed to me and we decided to push our way through. That was, until someone stopped us saying: ‘I’m not letting you through, we’re all trying to get to the same place’. We ducked under the barrier instead and found a gap to get back through further down. There was plenty of room here and people planning to go at our pace.

As it turns out, I am glad we did this. Others further back had tales of swimmers in front of them doing breaststroke, throwing up and clinging onto kayaks. As it was for me, it was a fairly smooth start straight out to the first buoy. Left turn and I was swallowing a lot of water. Slightly off track, but I corrected, turned and turned again. Now the sun was blinding me and I was still swallowing water. Rather too late, I decided to only breathe to one side (away from the waves) which was a vast improvement. I couldn’t see the final orange turn buoy so I followed feet until I got there and came ashore.

Swim exit. Neoprene socks allowed, so I wore my Gococo compression socks under my suit!

There has been a lot of discussion about the swim. Personally, I loved it and would happily have done a second lap. I gained chunks of time on my competitors and it was disappointing that I did not have the fullest opportunity to exploit my strength. However, I understand the decision made and it was right for the competitors and the conditions at the time. I do think there are some inherent issues with the sport where the swim is often seen to be survived, rather than fully integral. If I am a weak on hills or struggle when it’s hot, is it fair to put in hills, or keep a full course when it’s sunny? Yes, of course it is! But safety considerations do come into play more on the swim. I wonder if some compromise could be made with a time-out on lap one, splitting people into short- and long- course options so that most people could take part safely, but allowing the best to race the full distance.

Leaving transition – still a lot of bikes there!

Anyway, it was what it was and I wasn’t troubling myself about it during the race. I was out and into transition, stuffing in a banana, waving at my mum and carefully mounting. Andy shouted out that Louise, a clubmate, was just ahead, but she didn’t appear immediately and I knew she was a strong biker. It was fabby to ride on closed roads and not have to worry about traffic! I had plenty of space and only saw a couple of instances of blatant drafting all the way round.

Part of the route is a loop that goes out and back on the same road for a while. I was just in time to see the pros coming through before I was off up the hilly loop myself. I rode this well and was remembering to eat and drink, and kept an eye on my average speed as a way to stay concentrated. As I returned I saw how it looked further down the field – big crowds of riders out for a long day. I felt privileged to be where I was.

Cycling on the open road

Cycling near the start

A note on support round the course – it was great! I think I saw three young people playing their bagpipes,  residents out clapping us as we passed, and a chap away out near Garvald with flags, hollering and whooping with me as I went by. I tried to thank them all, when I had the breath to!

After about halfway, I started overtaking people who had passed me in the early stages. It was a good feeling. We had a headwind now, but I didn’t pay it any attention, tucked down on my bars. I did catch up with Louise finally, on the approach to Cousland, and we exchanged a few words. The final part of the course wiggles through town and I might have flagged a bit here, but before long I was over Arthur’s Seat and into transition just in time to hear the first male pro finishing his race! 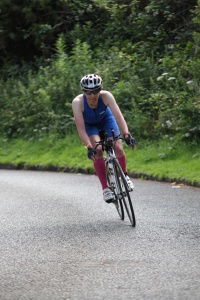 The final uphill … on the bike 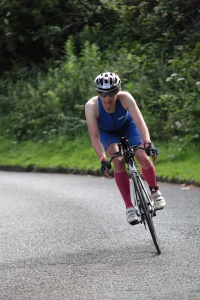 End of the bike leg

I had been debating whether to avail myself of the portaloos here and eventually decided I would. I ran into one, skidded in my cleats and nearly came a cropper! However, it was worth it as I left relieved and was soon out running with another banana going down nicely.

Running in on the bike

I had a positive mindset and started at a good pace. Up the hill, down the other side, turn, back up, down, into tunnel, up it and down it, disco party, up …. ohhh that hill was excruciating, along, up, down, down .. weave past other racers in the narrow bits, try and guess who was ahead or behind, who was fresh or just faster…  You get the idea.

I turned not far off my target time but now it was lap two and I was in trouble. I had supporters and people shouting my name at all sorts of unexpected places on the run course, but I could only grimace at them as I laboured past. I was nauseous, I wanted to stop and I was shivering. I have been here before and knew what it meant – dehydration. I needed a plan, and fast. I’d get to the next feed station and instead of racing through I’d walk. I’d get water, electrolytes, coke, more water. Then repeat at every station, knowing there were three on the lap. All I had to do was get to the next one, up the hill! Somehow I made it, did what I planned and carried on. After doing this three times I was feeling so very much better … 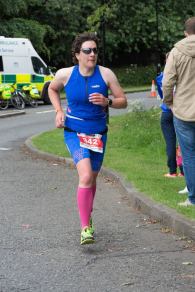 Someone get that ambulance to take me away! 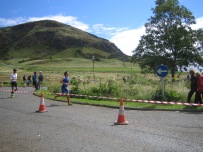 Run with view of Arthur’s Seat

Do I look tired?

Lap 3 and I almost felt normal again. I smiled at a few people and felt strong. This was my final circuit and I had rescued myself! Up a final drag, turn left, SPRINT!! Collapse on chair.

What a race! The run was brutal but I had got round. Finishing in 5:31, I had just tipped over 5.5h. Looking at the results, my bike leg was still off the pace of the others, but I had achieved my target speed and was faster over double the distance than I had been in my last race. My swim was great, my run was reasonable. I was 6th in my age group, which seemed to have a lot of strength in depth! 25th girl and 234th overall, keeping me in top 15%, which I was pleased about. Full details here.

I must thank my mum, Andy, Izzy and all the other people I know who cheered, supported and took photos!

Both feet off the ground! 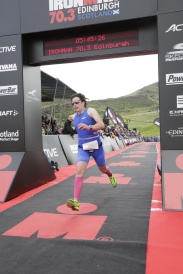 Falling over the finish line

Can I sit down now?

I had mixed feelings about the result. I did achieve most of my goals and given my main focus is swimrun I probably did as well as I could. A little part of me would have loved to get on the age group podium, but I can’t control the competition and I did my best! I also seemed to recover well. Not too much muscle soreness and after a week I was bouncing up and down hills like my normal self. Which was lucky really, because next up (two weeks later) I had a bonus race in my calendar, and it didn’t look easy!