It was nearly time for the first Open 5 of the year and I had not done enough mountain biking! Swimrunning all year had left me out of practice, and a couple of planned rides did not happen. I had arranged to go for a long test ride with Elizabeth, after the ‘rope across bike path incident’. That went well enough and I only fell off once despite the snow patches … so maybe I was ready?!

I had travelled light to the event and as we sat in the car in the early morning gloom I saw the dashboard thermometer read -3oC and by the time we got to the event start it said -6oC. Hmm. I might have chosen a different jersey if I had known that! However, the forecast was for sunshine and warming up so I stayed resolute. Well, I had no choice. On went the arm warmers, gilet and lobster gloves at least! 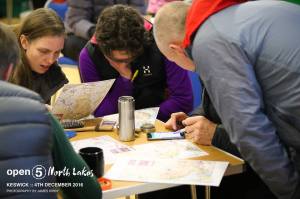 Highlighter always to hand for me, hairbrush for Lucy!

Looking at the maps at the start we knew we had to bike first. There was a big, obvious and committing loop winking at us. We wouldn’t want to run first and then find we had run out of time to do it. This was a slight shame as we’d have to ride before it warmed up! In fact just getting to the start was slightly traumatic, as Lucy’s fingers stopped working and we didn’t have the luxury of fully warming them up before we were hustled through the start. We had 3 minutes to spare though, no problem.

Looking at the control values, we had a change of heart. We shouldn’t do the loop, but some funny zig zagging to get all the high value ones to the south. Off we went in the opposite direction to our original plan. One glitch when we paused. ‘Maybe the control is on that fingerpost?’ ‘Let’s carry on and check the next one’ ‘Oh, it was the first one’ – duh! A little time lost, but not a lot. 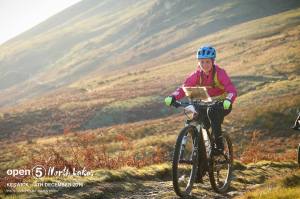 Saw James so made sure I got back on and started riding!

Ohhh wait for me!

I was doing OK riding the uphills and wide tracks but was freaking out a bit at the icy patches, downhills and techy bits. Think this was a combination of lack of practice and additional fear about falling on my only partly mended shoulder. I was feeling a bit sick from the fear of it and struggling to keep up, so I just let Lucy lead the way. At the bottom of a long holey section I found her considering the map. ‘We’d be best going round!’ she said. I was more than happy to trust she had figured it out right, so on we went following our original plan, but in reverse!

Jon went up though!

The downhill was cool and shady, but long, fast and easy-ish. As we saw others labouring up the other way I was pleased to be going in this direction. Another wee error as we turned right at the ‘road’ only to find it was a ‘track’ looking very road like. About-turn and straight on to the next mistake, getting lured by an easy looking bridleway shortcut, only to find it rapidly deteriorating into a mud and gate fest. WHY? We should have just whizzed round the road, don’t know what got into us. Must have been enjoying being off road again after all. 😀

We were joined by a male pair who followed us through a village and another overshoot. We must have been chatting and not paying attention as this control was very obvious – we just didn’t have our eyes out for it! There followed a slightly uncomfortable busy road stretch with the low sun in our eyes, but before long we had one last mega climb to burn our lungs and legs.

The descent was fun, I was pushing myself a bit more, spurred on by not wanting to get caught by any of the riders we’d seen tailing us into the previous out and back control. A spin down a road closed due to subsidence and now covered in leaves and free of traffic was a delight. We nipped through the outskirts of Keswick taking care with the map. I was tempted to start smashing it, but was very conscious of the run ahead so kept it reigned in 🙂 We were soon rolling back into transition.

We got a control here, I never even saw the stone circle!

It was the right decision to bike first as we now only had 1.5h for our run. I’m not used to racing this way round and probably hadn’t eaten enough, so got some extra food down in transition. We hared off at high speed despite having ‘just-off-a-bike’ legs. I quickly shoved the map in my bag as there was no way I had time to look at it. In fact, I was working so hard at keeping up I never even noticed a fine stone circle in the same field as a control!

Our pace was pretty high, even with rough ground and gates and stiles. I was feeling uncomfortable and my right leg was hurting in all sorts of places. I tried to relax and decided more food and drink was needed. I even resorted to a gel, which was like manna from heaven, so it must have been bad.

We marched up a rather steep hill, walk, run, walk, run. When we could see the sun, it was blinding. When we couldn’t, the side of the hill was in shadow and was dark and cold, with the grass frozen hard. At the summit we struggled to find the control. ‘’Thread’ 7m east of summit’. Was the summit the top looking bit, or the cairn? What was a ‘ thread’? We were circling the top, taking paces, checking the compass. Lucy was about to get me to take photo proof, when we found it on a little outcrop, only visible from below. 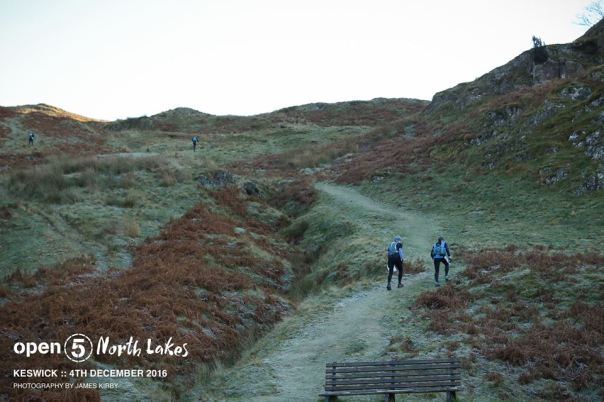 Frozen way up the hill

Right, decision time. We pondered a longer route getting an extra two controls, but decided to be conservative, taking a route that we should have ‘loads of time to do’. I slid on my bum coming down the steep bank, but then we were off again.

Lucy put me on the tow (no debate) and I was getting pulled along, not being able to see for both the sun and Lucy’s legs two feet in front of me. It was quite funny, but she was relentless even on the rough downhilly bits! I was feeling better, the food must have finally got into my bloodstream. Finally, we rounded a corner and could see the finish up a hill in front of us. Other racers were returning to download along the road and shouted encouragement. Into the field and one last uphill slog, the tow now slack as we were both at our limits.

The sun was much in evidence

I wasn’t sure how close we were, but as we charged over the line we had 2 minutes to spare. Wow! Well, it was a good job we didn’t go wandering off at the top of the hill. Slightly annoying that we had made a few mistakes on the bike that cost time we could have used well later. Never mind, no race like this is perfect and we were pretty pleased with our score and performance 🙂

Back to download before the cold sunk in and I even had time to wolf down a bowl of Nav4 veggie chilli. James T was very obliging in hurrying along the prize giving. I had a train to catch! We won our category and were 14th overall (same score as 12th and 13th but slightly later back). That top 10 still eludes us, but this was a great start to the season!

Looking forward to the next one, which isn’t until February. At least by then I might have remembered how to ride a bike, especially an off road one, and maybe we’ll get to bike second so I am not so broken on the run 😀

Thanks to all involved in organising and to James Kirby for the photos.