After exhausting myself in the trail race the day before, it was all I could do to eat, drag myself back to the campsite and collapse into my tent for the night. Luckily when morning came, the night time showers had passed and I had plenty of time to get ready. I made the trip back through the woods and over the hill to the festival village one last time, lugging all my gear with me.

The swim was two laps out to and around Derwent Isle. The water was reportedly 11 degrees, and when I got in it was definitely warmer than my recent acclimatisation swims. There wasn’t much jostling for the start line so I thought perhaps it would be very civilised. No chance! When the hooter went, everyone  pushed and shoved a bit until we got our order sorted out. 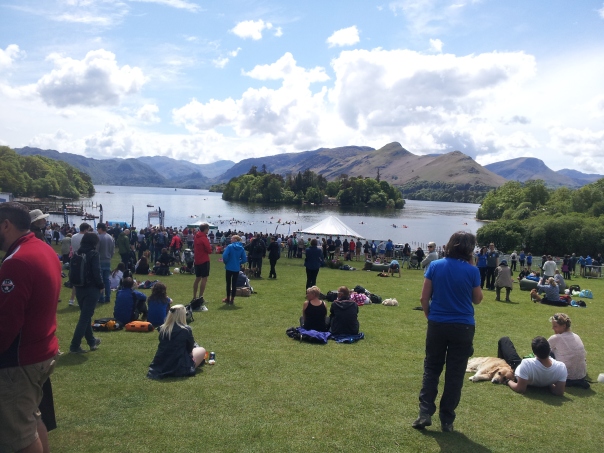 Twice round the island

Once we left the muddy shallow waters, it was beautifully clear. I could see random things on the bed of the lake, like an old umbrella and some railway track. Sighting as we went round the island was hardly necessary – keeping the bank a constant distance to my right was enough, plus staying in water just deep enough to avoid the occasional rock that loomed up.

I had a slight panic wondering where we were supposed to head towards the shore before going back out for the second circumnavigation. I had images of going round and round the island indefinitely … but the mass of white tents of the festival village came into view, along with a buoy marking the ‘turn’ point.

I was still feeling good and enjoying the cool water. I was also starting to close the gap on a group of swimmers in front, which is my usual style when swimming (I’m a slow burner!). As we rounded the top for the second time I felt good, and was swimming near another person. I caught a few glimpses and was fairly sure it was a girl. I kept trying to come past, but every time I drew level, she pulled away again. I was running out of juice! As we approached the shore, she and another swimmer took a different line. I hesitated but decided to be confident about what I was aiming for.

Then I was near the finish pontoon and the other two swimmers suddenly appeared just in front of me! I had been keeping it in mind that the time didn’t stop until we crossed the timing mat; which was up the shore and onto the grass. I swam all the way in whilst a man stood up and walked in unsteadily on the uneven stones. I sort of launched out onto the plastic blocks like a creature on a David Attenborough show.

I had been right – there was the guy I had just passed and the other person was a girl. Time to switch from amphibian to cheetah! I sprinted up the matting and had to make a split second decision to go onto the little stones in my bare feet to be able to overtake. I threw myself over the timing mat just in front. Paul, the race organiser, just shook his head laughing at me 😀 .

We were both given the same time, but I finished ahead, placing 3rd female / 11th overall. I felt a bit bad doing that, but sometimes racing does get tactical and I was pleased to get on the podium in both races at the weekend. Though I did have to wait until prize giving to find out!

In contrast to yesterday, I measured the course a little shorter than advertised, at 2.5km.  This time I don’t think I’d have minded doing another lap though 😀

Next up I’ll be back to multisport at the Isles of Scilly swimrun.