It was time to head down for another Open 5, and this month I was going with Glen, another newbie who I’d convinced this would be a good idea! Due to snowy conditions, we headed for the coastal route. Numerous signs announced the presence of coffee chops, but it took a couple of detours and a double stop at a level crossing to find one open and willing to serve us. We continued the theme once we arrived in the Pennines, as we visited three pubs before getting to one that a) could serve us and b) had something I wanted to eat. 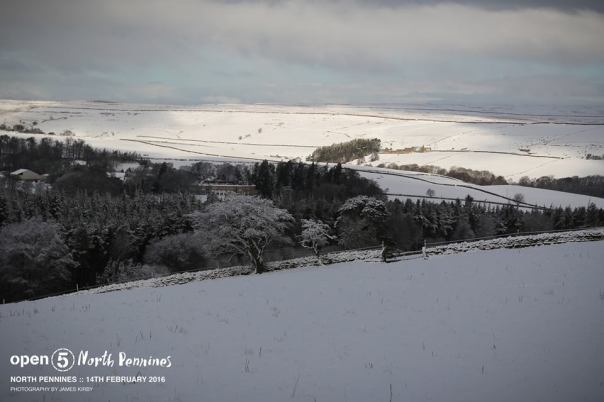 Snowy hills greeted us in the morning

Lucy had texted me halfway down to say she wouldn’t be able to make it 😦 . It was not entirely unexpected as she had warned me of a bad tooth infection and was somewhat drug-addled and exhausted. She often gives me warnings about things, but this is the first time I’ve known something to actually stop her, so it must have been really bad.

After a noisy night in the youth hostel (why did the beds creak with every turn?!), it was a rush in the morning as time slipped away. Solos have to be away earlier than pairs, but our plans to set off promptly were scuppered as we had to defrost the car enough to open the doors and scrape all the frozen snow off the windows.

Trying to work out what to do with the run map on my own!

Jon calming me down with some map chat

I haven’t done an Open 5 solo since April 2012, so it was almost a novelty and I was a little anxious. I felt under pressure as I looked at the map and tried to figure out something sensible. Bike looked OK, but that’s the one I’m used to planning for! I kept staring blankly at the run map waiting for inspiration to hit. Jon (Itera team mate) appeared and I felt better after we chatted a bit. He sort of offered to team up as a mixed pair – but by that time I had psyched myself up for solo and registered and … but on reflection, I think I’d say yes if there was a next time! 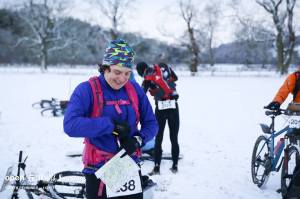 Marking up the map

I headed out with Glen after making sure he was all sorted and was remonstrated with for letting him pin his number on sideways. But we both set off at almost the same time, with the snowy whiteness and bright sunshine making my map highlighting stand out brilliantly. Makes a change from rain washing it all straight off again 🙂

I had decided to run first, since that’s what I normally do. It would also mean I got the part I was less confident about done, and I hoped that the sun and traffic would clear some of the roads by the time I got to biking. 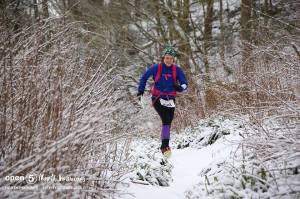 Nerves not settled yet, but look at the scenery!

Running, I hope this is the right way?!

In actual fact, most of the run went OK. My only strategic error was at the start, as I did a long wiggle to get a 10-pointer. For the same extra distance I could have got 20 points later on instead. Luckily, I didn’t realise this at the time, so it wasn’t on my mind! Instead, I was enjoying being the first person to make tracks in some of the deep snow. Even the cross-country romp across heathery moorland was fun. 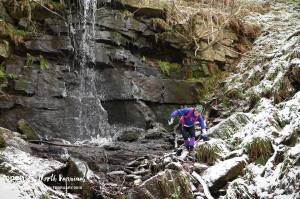 Off the hill and down to a river crossing, searching for a control on a tree 2m downstream. I followed footprints but could not find it anywhere. Super fast Tom Gibbs arrived looking in the same place me, and then someone else I had previously overtaken joined us. All 3 of us milling around … Just as Tom said, “maybe they meant upstream”, Glen appeared from the other (upstream) direction and we spotted it behind him!

On the move again, and I was pretty pleased with how it went. I didn’t panic in the woods following one lone set of old footprints through the snow (it would have been impossible to find the path without them) and managed to eat a whole chia charge flapjack on a run down a road. Crossing the river and heading up a steep hill, a car came past me before skidding to a halt and sliding down again backwards. I kept out of the way and headed for a final small loop via an old engine house which I’d like to have explored a bit!

15.5km done in 2h4 mins, dropping 4 controls worth 50 points. I did wonder how much I was missing the ‘Lucy effect’ though. Normally she navigates as fast as I can run, and pushes the pace in between as well. This time I was having to keep an eye on the map, and mentally kept asking myself ‘if Lucy were here, would I be running faster now?’.

I did a quick transition and was back out on the bike, up a road I had checked was clear of ice as I had run in. Two easy controls on the long climb up to the woods. Here I was very careful to stay on the rights of way (byways), though there were faster routes on the fire roads. Clearly there had been some frozen puddles earlier in the day, which were now pools of water filled with shards of broken ice. I just went through the middle of most of them, getting a shock when they were deeper than expected!

Controls peeking out from the snow

There was a muddy slog up a hill. I was with another team and a solo, who stopped to check our direction. I said: “If anything we’re heading east instead of southeast, which would take us directly to the control”. I continued on and came out at a junction with a big track in front of me that I wasn’t expecting. ‘Hmm, funny’, I thought, ‘but this is the byway’, so I turned left for an out and back. Suddenly it occurred to me – was that the junction with the control? That I had been heading for? That was where a big track led off? I shouted to the others to ask if they had checked – they said no, it definitely wasn’t there. We rode the distance I expected, but the trees were now too close, and there was no control on the posts. Darn! Now I was convinced it was back where we had come from. Yes, the map was wrong, but if I had engaged my brain and not got distracted I probably wouldn’t have made the mistake! 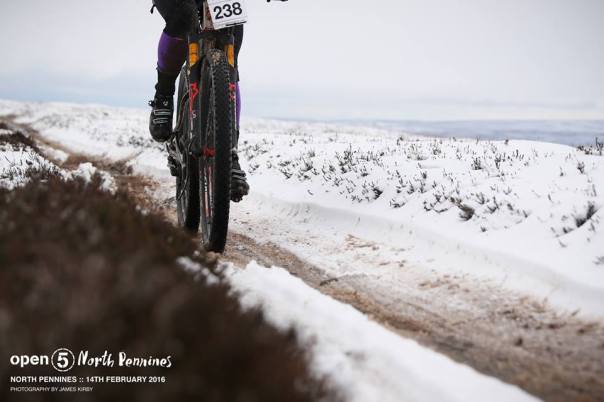 It had cost me about 9 minutes, and I was determined to make up time by pushing on. Fortunately, the riding here was amazing. In contrast to the roads of last month, this time we were up on the moors. What might normally have been straightforward wide tracks were made fun by snow. I even had a chance to notice some of the amazing views, briefly! There followed a twisting, winding bridleway, where I was relieved that others had marked the way before me – I wouldn’t have wanted to be the first, trying to work out where it went. 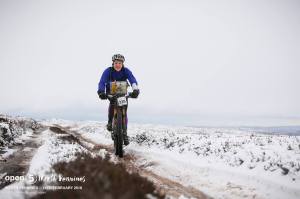 So to get lots of pictures, I just need to leave early? 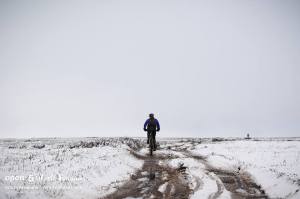 Riding off towards some lovely singletrack

As I popped out near the start, I allowed myself a minute or two to work out where to go on a second loop. I could definitely get all but one remote control on the moor. But as I calculated things, I realised I would definitely be back about 15 minutes early if I did that. I hedged my bets, going round the controls in such a way as to leave the decision to the end. Yes, it turned out I had to go out and back to the trig point hidden on a hill in the clouds. Tom went past me again, and gave some words of encouragement. It was actually a nice section to finish with, even if I did fall off on my way back down! 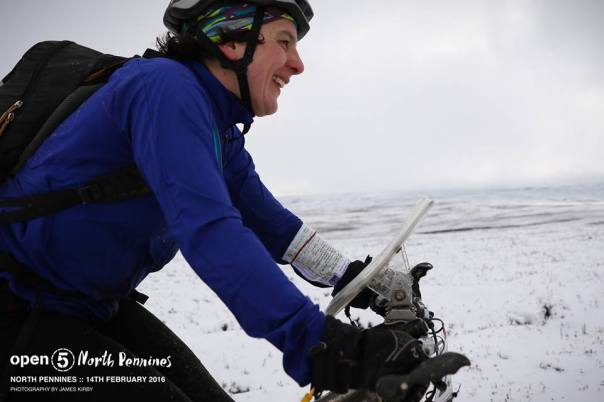 As I hit the road, I was short of time. There were a final 15 points on offer on a route that was no further but was off road. I simply didn’t have time. I shot off down the tarmac, just as a hailstorm whipped up and combined with a headwind. It pelted my face and felt like hundreds of stinging needles. I shielded my face with my arm, and peered out from one slitted eyelid, hoping nothing would come the other way … Finally, I got back to the finish, narrowly avoiding a car which turned without indicating. What a stressful end! I dibbed, 1 second over 3 minutes late – ouch! 8 penalty points, not too bad.

Finishing – late – and with a very sore face! 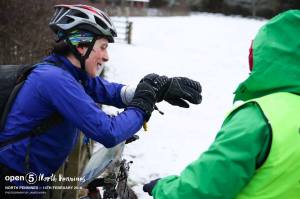 Argh – just into my 4th minute!

I got changed rapidly as the descent and hail had chilled me. It was a strange experience having to queue to download and not having to queue for food. That’s what leaving half an hour earlier does! I had got a high score but, like last month, realised so had many other people.

When results were announced, I had won the female solos, but it was close. Overall I was just outside the top 20. Despite having done some amazing fun running and biking, I felt a little flat. I know there were a couple of minor changes I’d make, but no race is ever perfect. Maybe I am out of practice, or maybe pairs suit me better, but I definitely missed having someone to push me on, to chat to on the way round and to share the ups and downs with! At least next time I’d know to say yes to Jon. And get better soon Lucy! 😀 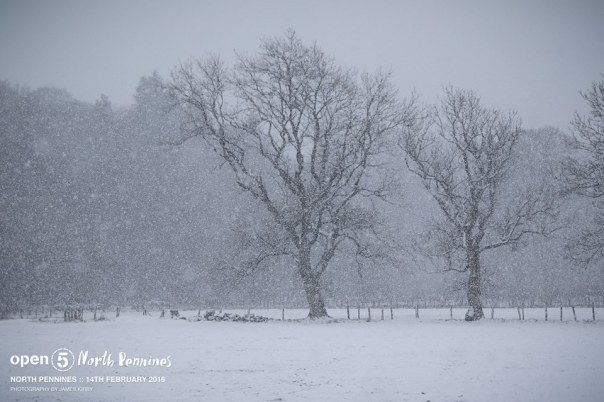 Glen had a good time too, didn’t get too lost, and finished in time. I think he’ll be back 🙂 . It only remained for us to drive home by the scenic route, watching a beautiful sunset over the snowy moors, before descending into darkness and more falling snow.

Thanks to Open Adventure for putting on the race, Joe and friends at Nav4 for food, and James Kirby for photos.

Still looking at the map …