The trip down to Wales was quite eventful. I was travelling with Jim, a friend from the Wild Ones (Edinburgh’s outdoor swimming group). As we approached the summit of Shap on the motorway it was snowing hard and we were driving slowly, trying not to become one more of the various cars and vans strewn around the carriageway. Jim remarked he was anxious as it was 40 years since he did his ice driving training and some time since he’d practised in a car park. I was thinking I probably couldn’t have picked my driver much better …

We arrived at our accommodation safely, a cheerful pub with a spacious room and extensive menu. As we settled down in the bar we chatted to some guys who were racing for the first time. Their ‘main man’, an Ironman veteran, had bailed at the last minute. I joked that maybe it was because there wouldn’t be enough sun or perhaps he was worried about his shorts getting muddy … In any case, after I’d given Jim his detailed tutorial, I passed on a few more tips and we left them still cheerfully partaking of beer when we went to bed! 😀 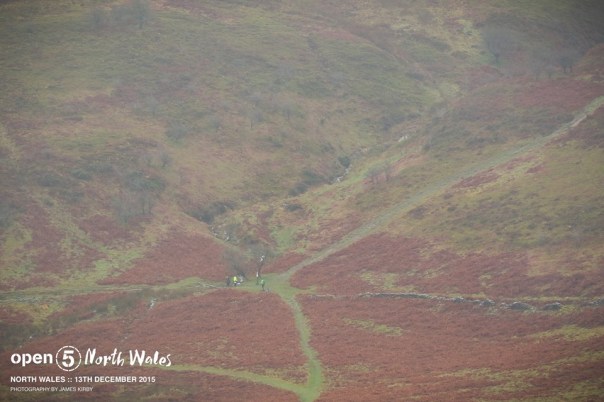 Misty moisty Welsh mountainside = time for a good day out

We were so close to the registration area that we shouldn’t have needed to rush in the morning. But what with a slightly more leisurely breakfast than planned, helping Jim with route ideas, needing to get to a remote transition and the new, earlier start times, Lucy and I were almost last to start for the second month in a row.

We dithered about what to wear as it was cold standing around and forecast for rain. We started straight up a hill and Lucy’s running legs had obviously returned. I had to concentrate hard to keep up and felt a bit queasy from eating so much dinner and breakfast. I was also soon boiling and wriggled out of my waterproof as we walked a steep bit.

The hills were shrouded in cloud. As we approached a high point, I spotted a couple of Santas emerging from the mists. Then another, and another! We ran for a while mingled in with all these people in another race, before we struck out to go ‘off piste’. 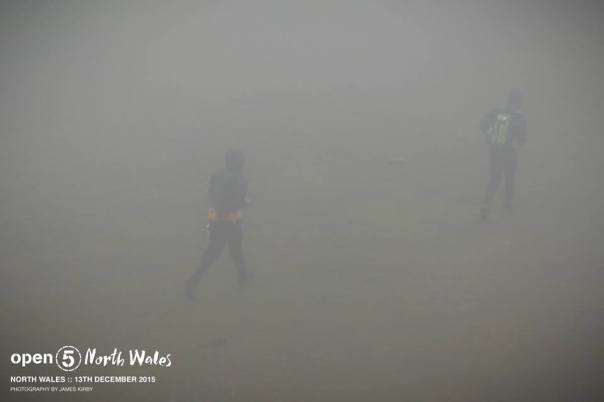 Anyone seen Santa round here somewhere?

The map had looked daunting with lots of tightly packed contours. But I was having a surprisingly good time, despite the fact I still didn’t have enough breath to chat. What?! Quite a change from last month! Following Lucy downhill is hard enough at the best of times. The hillside was covered in heather and bracken and her movement reminded me of startled deer bounding away at high speed. I lumbered behind, feeling my ankles go a few times before deciding to take it a ‘bit more slowly’.

We were moving well but kept debating where to go to next. Out of two controls on Lucy’s ‘optional’ list, we went for one and left the other. At the time it seemed a good decision and we came back to transition after just over 2 hours. The route was interesting and I was happy that I had been pushed hard but still had fun!

After a change of tops, still anticipating rain, we set off biking. As soon as we were up on the hill proper, the going got more difficult, with variously mud, rocks and bits steep enough to have us off and walking! Over the top we went and as we flew down the other side I wondered if I should have checked the contours more carefully when I was planning. Maybe the ‘shortest’ route wasn’t the best? We also had a decision to make about control ‘number 9’ – worth plenty of points but a bit stuck out on a limb. After changing our minds twice, we went for it, out along a fast road round the bottom of the hill.

Tom and Chris (eventual winners) flew past us, so we thought it wasn’t a bad choice.  Lucy had told me about her extreme lack of sleep in the last few days. As we bowled along there were mutterings of tiredness and we might have passed a coffee place, but we only had £1 on us!

As we turned off road, the mud got stickier and deeper than anything we’d encountered so far, but we were still pedalling. It was not the same story after the control though. My wheels stopped turning as they jammed up. We were pushing heavy reluctant bikes through a mud bath of doom!

We stopped to poke the mud out with a stick and I swiped vainly at my map board to try and see through the smears. I decided we ought to have turned back, lost height and gone by the road. But hindsight is a wonderful thing and now we were committed. I kept hoping it would be better just round the next corner … A kilometre later we finally got to something rideable. Never have puddles been approached with such intention – we needed big splashes to clean some mud off!

Our route choice kept changing as we bumped down a rocky track and then decided to go the long way round via another control and a road climb, rather than retracing our wheel tracks back up the difficult way. And now we were concerned about time. With several high value controls left up on the hill, we had to go up and get them.

I was very relieved to find ourselves on a rideable track, gaining height at speed. We were tempted, so tempted, to go and do an out and back to some more high points on the ridge line. But Lucy’s sane brain got the better of the situation and we pointed our wheels down a wet grassy track, onto some more slidey stuff and eventually out onto a hard packed track we’d run earlier in the day.

The last control wasn’t straightforward to ride in and out of (or to dib without standing in a river), and suddenly we seemed to be very short of time. We hooked up the tow for the last km dash back to the finish and managed to arrive 2.5 minutes late.

Not too bad, but on reflection we could definitely have been slightly smarter in our route choices … one less run control and two more bike controls in a different order perhaps. But it’s a sign of good course planning that the ‘best’ route for us wasn’t immediately obvious. At least we didn’t have any disasters! Plus, the heavy rain never did materialise.

Si (course planner) looking pensive before the start. Don’t worry: it was great!

We were good enough to win female pairs, and 10th overall. I was also pleased about how well we were moving … still some challenges to set ourselves if we can combine both smart racing and high speed at the same time 🙂 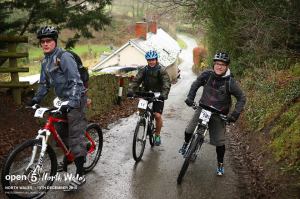 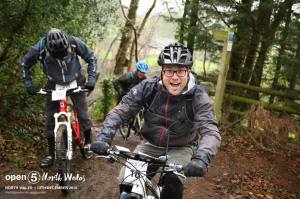 My pal Jim did brill to finish well inside the top two thirds, with a big smile on his face as well. And this from someone who still finds mountain biking scary and proudly has ’60+’ next to his name! Our friends from the pub seemed to have a harder time of it; looks like they had some ‘issues’ on the bike and only just squeezed in one run control. But if you’re reading this, I hope you still enjoyed yourselves?!

Many thanks to James and all at Open Adventure for putting on the event, James Kirby for photos and Si Enderby for course planning. Time to go and run around in the hills in between eating mince pies 😀