For a few years I’ve had the Solstice Triathlon on my radar, but the day or date have never been suitable until this year. Opening of entries was delayed due to issues with landowner permission. But Twitter told me it was suddenly available and I jumped in – it was sold out within a day or two. The race didn’t have anything to do with my swimrun or other racing plans, but I knew it would be fun!

This is an off-road triathlon in the Pentland Hills, just outside Edinburgh, where I train a lot. The week before, a group of us went up to ride the course, led by Andreas who is also in my club. We got a good look at some of the best lines and I went home satisfied I had done some prep. Next week we got an email saying the bike route had changed! Oops. Oh well, at least I had made sure everything was working on my mountain bike 🙂

Jo Thom has won this race since it started and I was looking forward to a close battle with her. Sadly, with an on-the-mend injury she had to make the decision to play it safe and withdraw. I think resisting the urge to join in and defend her trophy was the harder thing to do. 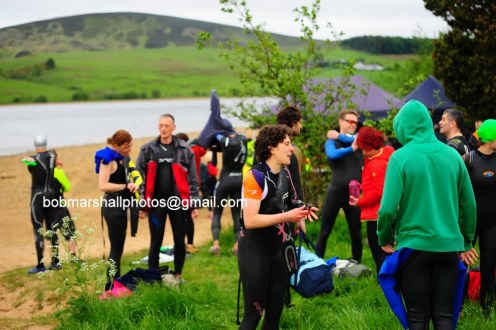 Getting ready. Plenty of people to chat to

I got a lift up from work with Andreas. I could tell there was some tension – this was his first triathlon for 6.5 years! It was colder than I expected and there was a strong wind. We shuttled back and forth between the car and registration, with Andreas picking up a puncture from a massive thorn! Better then than before the race, though now I was paranoid about my own rear tyre which had been slowly deflating in previous days. I hoped the extra slug of sealant the night before would keep it up.

The briefing. Feeling pretty chilly for standing around

Before the briefing I got right into my wetsuit, jumped up and down and swung my arms around to keep warm. It felt weird to be in a full length swimming wetsuit again. We got into the water and people were oohing and ahhing about how cold it was. ‘I think it’s about 10 degrees!’ someone exclaimed. I said ‘nah, about 13’ … who knows for sure, but it was definitely warmer than 10 😉 .

I must be somewhere near the front-ish

Off we went, heading towards an invisible buoy. I started off trying to sight but soon gave up and followed everyone else. I did my usual and got into no-man’s land in a gap between two groups. As we neared the finish I just about caught up with the lead group, but really I should have been trying to draft them all the way. Another lap and I’d have been right past 😀 . These 750m swims seem short these days. 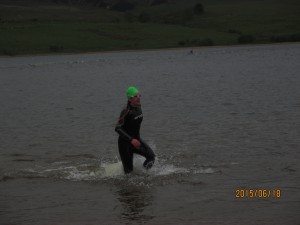 How do I get this thing off?

My transition felt slow but I was methodical. I was soon off on my mountain bike with the wind at my tail, racing off to the first hill. Andreas passed me here, powering past and away. My glasses had steamed up which was extremely irritating. I had lenses in, so considering stuffing them into my trisuit pocket, but wasn’t sure they’d be secure. Down the other side and I still couldn’t see; not ideal! The next turn was a sharp hairpin straight into the next hill. My calf almost cramped so I eased off for a minute or two. Up this side I was glad it had been very dry recently, as it is rutted and would be hard going when wet. As it was, I still picked the wrong line once or twice and had to jump off. At least I could see again now. 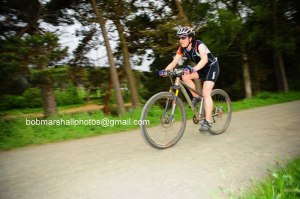 A fast descent on a deep loose stony surface followed. A couple of guys flew past, but I wasn’t taking any risks. I don’t need an injury now! I also slowed for the water bars to make sure I didn’t hit them too hard or at the wrong angle. I think a few people punctured coming down here, but I was soon through and firing on again.

Heading up the last rocky hill 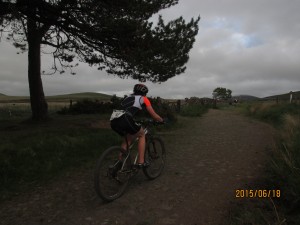 Compared to the old course, this route was more technical and harder going. The climbing isn’t over after the first two hills. There are couple more ‘stings in the tail’ to come. I actually started feeling really good on the last one, which was fortunate as then we turned into the headwind towards transition. I was in a little world of my own, as there were very few other riders about. As I rounded the corner, I was met by loud cheers and clapping and the hustle and bustle of transition. I was a bit taken aback!

Into the headwind now, final leg

Bike times on the new course were 10-15 minutes slower than last year. The run had been shortened to make sure everyone could get home in time for bed. So it was just a 3.5km blast round Harlaw reservoir to finish. This route is really familiar to me as I’ve trained here many times with Izzy, ‘finely honing’ (ahem) our swimrun technique. I felt pretty good. I ran not knowing how close the next lady might be and soon was over the finish line and sat in a little heap. 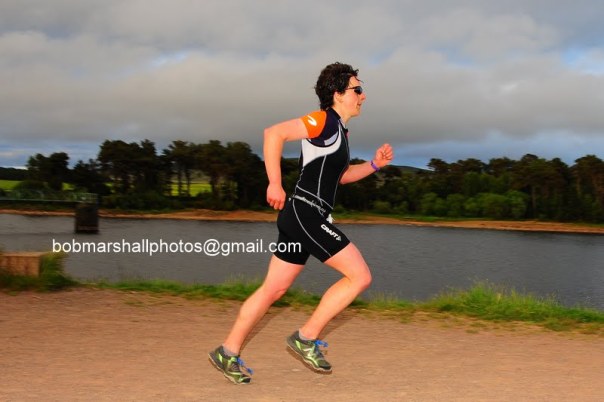 Favourite running photo ever so far!

Final results were that I had won and was 6.5 minutes clear of 2nd place. I was 9th overall. Andreas had smashed it round the bike course 2 minutes faster than anyone else and held on to win the men’s race. An Edinburgh RC win-win! It was suggested we drive home shaking our splendid trophies out of the window and shouting …

A great wee race, well organised and complete with free transition towel, banana, hot food, water and waffle. I’ll keep an eye out for it again next year!

Many thanks to Pentland Triathletes for organising the race, Andreas for giving me lifts, Bob Marshall and Hamish MacDonald for the photos (the labelled and unlabelled ones respectively) and to everyone who cheered, held open gates and helped make it a great event.

Now, back to swimrunning and other endurance adventures …

ps rear tyre has stayed more inflated than it has been for months!