So, it’s been some time since I got over excited in the office about getting to race Ötillö this year. You can read more about it here.

Every year, in about October or November, I start thinking about what my ‘big race next year’ might be. In 2012 it was Celtman. I devoted 2013 to triathlon, particularly the Scottish middle distance championships. In 2014 it was all about Itera. 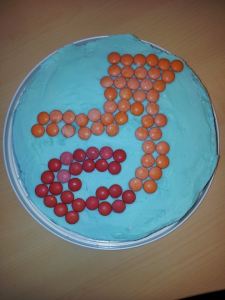 Training tip 1: persuade your friends to make you an Ötillö cake.

I like to have something to work towards, something that I might not be able to achieve tomorrow, or next month, but that is doable in 9 months’ time. I also like endurance races, something quirky and not too mainstream.

So, at the end of last year my eye alighted on Ötillö. I’ve looked at this race several times before and decided it wasn’t for me due to the ‘excessive’ amount of running (65km in total). However, the effect a couple of expedition length adventure races can have on you is that what before were seemingly daunting distances provoke a reaction akin to ‘oh, only …?’. I also got inspired by an episode of the Adventure Show (an ace BBC2 Scotland programme, which airs sort-of monthly, following adventurous races and other goings on!). There was a segment on two chaps running up and down mountains, looking free and comfortable. I wanted to be like them and thought why can’t I run further?? 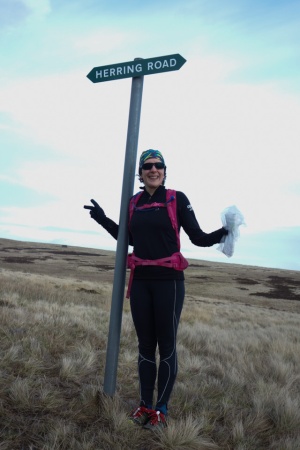 Running with a hint of fish

And so the wish was born. With a lack of other options grabbing my eye, I set about finding a race partner. This was easier said than done. I encountered a variety of reasons for being turned down, ranging from being a teacher and having to work on a Monday, being too busy studying for exams, concern over getting too cold in the water, expecting a baby, not being able to swim and plain old ‘don’t have time to train for that’. I was also ideally looking for someone who I knew, located somewhere nearby (ish) and of a similar ability to me in both swim and run. I didn’t want big mismatches in either discipline as I thought it could become frustrating.

Eventually, as I almost gave up hope, I found Izzy … so close to home I couldn’t believe I didn’t think of her earlier! She’s even in the same club as me and we had a close race at the inaugural Celtman. Even better, she said ‘yes!’ and the race was on to get our application submitted.

Running with a hint of water

Since then I have been training! Lots of running. If you’ve been reading my blog, you’ll know I had problems with my hip back in October. After several physio sessions and some determined doing-of-prescribed-exercises, I have been going from strength to strength – pun intended! Whereas the last few years I managed to race on about 20-25km a week, if I was lucky, I can now squeeze in 50km a week and I’m going faster. I find myself wondering since when did running become a valid form of transport? I run to work, the pool and even friend’s houses (“hello, how are you, may I use your shower?”).

Swim training has been interesting. I have found that I can now keep up with the front guys in my lane and go faster than I have for many years. I suspect that I have not got physically better, but that there are strong psychological factors at play. I know I need to swim harder, there is a reason to get better at it, and I therefore believe I need to / can have a go at keeping up with them. 10km of swimming is a rather different prospect to a 1.5km triathlon bimble 😀 .

There have been other things to think about too. Like getting to know Izzy better (we’d only really spoken a handful of times before), reading up about the race and getting kit sorted.

In this regard, we’re delighted to announce that Head Swimming are sponsoring us! They are the only company to offer a full line up of swimrun specific wetsuits. This sport is really popular in Nordic countries, where the brand already has a strong following. We are lucky to be able to train and race in a top of the range suit, so we’ll have no excuses there! If you’re doing any swimrun events and want to know more about what to look out for, just ask. More on that later, with a wetsuit review to come 🙂 .

We’ve also started experimenting with paddles, pull buoys and run tows. We have two great options for open water swimming nearby, but the water has barely warmed up enough to get in (for me, at least!). We braved it twice last week, and are getting used to swimming in shoes and running in a wetsuit. 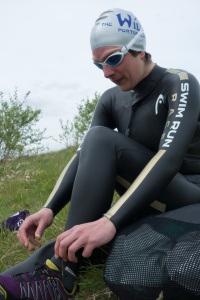 Get in and out 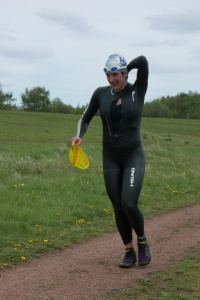 I like to build my race season to support my big target event. The trail race at the start of this month was a great test of my running legs. Next up is a 5km swimming race. I’m not worried about going the distance, even though this will be the furthest I’ve swum for many years. Rather, I’m keen to feel strong and fast! Although it will be warmer ‘down south’ in Salford Quays, a bit of speed won’t go astray in helping me stay toasty 😀 .

Getting ready for our first Scottish dip

It’s also been a bit of a whirlwind organising a ‘practice’ swimrun event under race conditions. With a last minute change of plans, we’re heading out to do Borås swimrun (near Gothenburg, Sweden) in less than three weeks’ time (gulp). It’s an event that’s about a ‘half distance’ Ötillö, but with more transitions per km and significantly more ascent on the run. This is focussing our minds nicely! Meanwhile I just need to learn how to pronounce Swedish words. “Er-Till-Er” ? “Bor-oarse” ?

Keep an eye out for more progress reports. You’ll be able to read about how we’re getting on here, at 220triathlon.com and sleepmonsters.com. And if you’re doing a similar event and want top tips, look out for our advice articles for Loch Gu Loch entrants. This will be a great swimrun event based around Loch Ness on 26th Sep. We plan to be there too, assuming we’ve survived the Swedish version! We’re learning as we go along and are more than happy to share what we find out.

Many thanks to our sponsors and supporters: Head Swimming, Beet IT and Chia Charge.