The final of this winter’s Open 5 series was in the Peak District. Practically ‘home ground’, as Lucy grew up near here and Andy lives ‘just over the hill’. Unfortunately Andy was away working on Saturday, so I came down and stayed with Lucy and her dad instead.

I was annoyed to have forgotten to take my Feed Zone Portable snacks out of the freezer, but Lucy had some recipes and ingredients for other treats. I was also suffering from muscle complaints. A sore shin had appeared on Monday (I thought ‘what would Graham (the physio) do?’, the answer: rest, ice, gentle massage), plus an achey hip and a funny back muscle getting out of the station. I was getting paranoid, but had a happy evening chatting and constructing what were, in effect, homemade Nakd bars. Soon I had forgotten about aches and pains and it was time for bed.

Next morning I woke up and the first thing I noticed was a parched and sore throat – uh oh! We set off almost on time, but still had to park in the slightly more distant parking area. The map was interesting and we had quite a bit of discussion about it. We also debated what to wear (cold in the wind, warm in the sun, rain forecast later) and engaged in our usual faff. 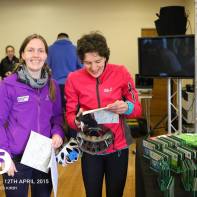 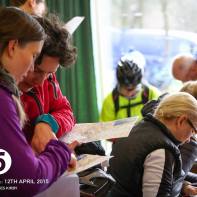 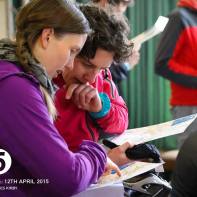 We did manage to set off a little earlier than normal, but not much! We also decided to stick to ‘tradition’ and ran first. Lucy has obviously much recovered since the previous two races as we were speeding. I was back to my usual position i.e. following. But I was keeping up and enjoying the trails. We had what felt like hundreds of little gates with latches to fiddle with and stiles to clamber over. I paused to avoid Lucy’s trailing leg each time and then scampered after her.

We only had two minor hiccups. First, Lucy’s plaits fell out! This is the only time we’ve had ‘hair issues’ in a race, though I was also keeping my buff on to keep mine in place as I really need a cut! Next we made one small nav error, quickly corrected but to the puzzlement of a couple with a dog. We ended up running past them three times 😀 .

We chose to go for an ‘optional’ 10 pointer, adding about 1km to our run. Just after that we caught up with two guys on a stretch of road. One of them clearly decided to race us and picked up the pace. Lucy responded and I came up next to her. His pal was getting left behind. We did not slow. I thought: ‘you’re just leaving your partner behind, and did you know we can comfortably keep this up for another hour?’. As we crossed a stile into a field, they both disappeared behind us and we had a little chuckle about it. Sorry guys! 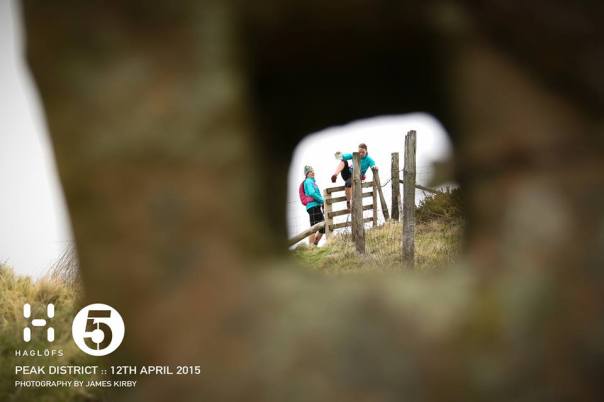 The hill was tough, but the ridge was fun with the wind behind us. I tripped for the second time in the race and sprawled onto the ground, my map blowing across the hill in the gale. Luckily Lucy caught it and we were off again. Down the final hill my knee was a bit sore and I became more cautious. Lucy had to wait. But when we got to the road we were pushing along to the final control.

We came in after 2h9mins. A little longer than planned, but not unreasonable and my shin had been fine :-). I’d had a few looks at the bike map on the way as I was concerned about getting caught at the end. We wanted to go round clockwise to enjoy the best descents and the easier (better surfaced) climbs. But this meant leaving a committing big hill at the end. After a quick discussion, we made a decision before we set off to drop a control early on. 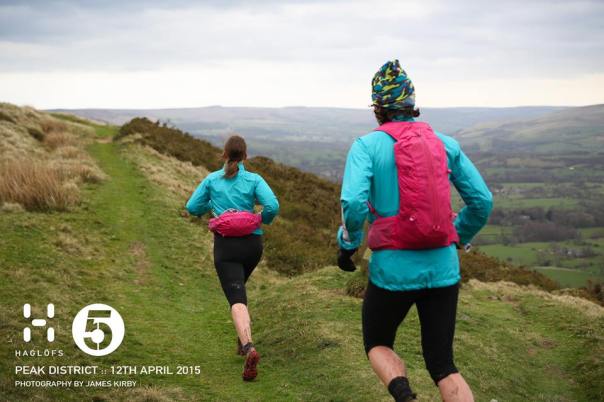 Did someone say ‘team’ ?

On the first very steep hill, Lucy stormed up whilst I got off and pushed a bit. “Good effort!” I shouted, but Lucy responded “I’ve got other issues now!”. Put delicately, we had some severe ‘lady pains’ to deal with. Cruising and downhills were fine, but efforts were impossible. Sadly our first aid kit had no pain killers, so we are very grateful to the fellow competitor who gave us some paracetamol whilst Lucy rolled on the ground in front of a bemused photographer. A technical downhill that had me walking more than once cheered Lucy up a bit, but some more on-the-floor manoeuvres were carried out whilst we waited for a mountain biker to rummage in his bag for Ibuprofen. He couldn’t find them! So we carried on and implemented use of the tow on the uphill tracks and on the roads.

We were making fair progress now and feeling more chipper, but decided to miss an awkward control for 10 points involving extra climb and instead bombed along a road. About 10km to go, an hour left and our average speed so far was over 13km/h. Looking good! 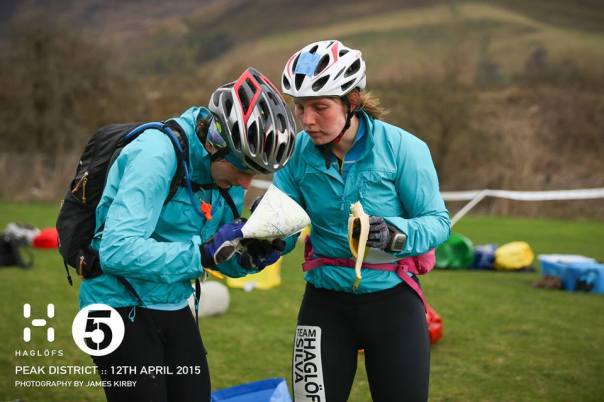 Unfortunately, halfway up the next hill it started raining. We came out of a small valley onto an open, flat and exposed moorland just as the heavens really opened and the wind got up. We were battling straight into the gale and were staring at the tarmac under our wheels as hailstones clattered off our helmets. I knew we had to turn right when the bike computer said something-point-two km, just after some trees on the left. But we couldn’t check to see the turn off by just looking up, and we seemed to be barely inching forwards. I managed to stay upright (I’d already been blown off once, earlier on) but we were both having trouble riding in a straight line.

Eventually we got to the control in the corner of a wall. We decided to duck down and throw our coats on even though we were already soaked to the skin and ‘nearly there’. It helped, but I went from ‘OK’ to shaking with cold. Suddenly we felt we had to get back very urgently. We knew we’d now have to miss an accessible control on Mam Tor and just return as soon as we could. There wasn’t even any debate. Hands were frozen and on the next uphill headwind section Lucy couldn’t even hold the tow. I tried to push her instead but it felt like a loosing battle against the elements. Scientific studies show that swearing can make you feel better, so we turned the air uncharacteristically blue until we turned with the wind and headed downhill for the final run back to the big yellow finishing arch. 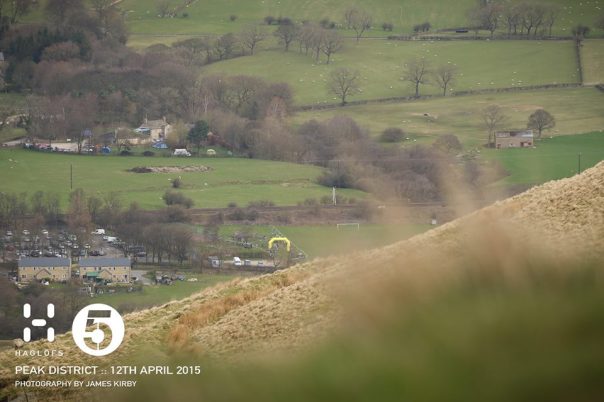 Shame we didn’t have a view like this on our way back!

We actually came in 3:40 minutes late, despite missing a control at the end. Thank goodness we’d also chosen to be slightly conservative earlier on!. But oh how we’d wished we’d set off earlier in the morning 🙂 . The finish area was almost deserted and the marshals told us people had been bailing out early. We’d had no choice! We rushed to the car but had to ask someone else to undo our buckles to get at the keys. I haven’t been so cold all winter. After a rapid change and some hot veggie chilli I was feeling better, but excessively tired!

We won our category, came 11th overall again and won the series. Full results here. I also think we had one of our best ever runs in an Open 5 together. When I got back home I was feeling a bit ropey and by Monday morning had a full blown cold. That would explain the sore throat and some lacklustre training the week before – but I’m just grateful it didn’t arrive a day earlier!

Thanks to Haglöfs for sponsoring the series, their kit is really great for outdoor adventures. Also to Open Adventure for the events, James Kirby for photographs and all the marshals and course setters. Looking forward to the next lot already! 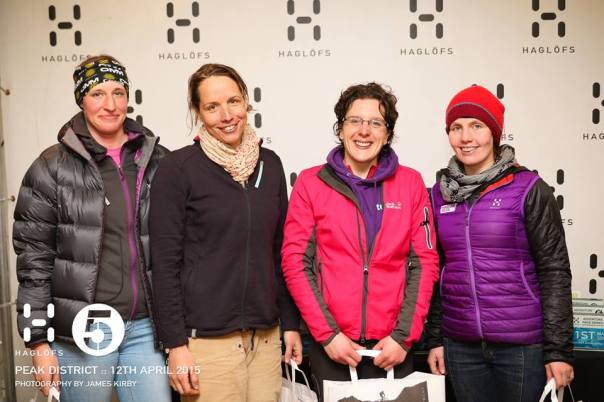 Just about warming up, wearing almost all the dry clothes I had with me.