It feels like it’s been a long time since my last race. I could pretend this was because my physio had drummed into me the message that I should spend time ‘building a base’ whilst letting my hip recover and not always interrupting training with another hard race. But really it was because there had been nothing on for a month! 😉

I had been anticipating this, the last race in the Bowhill duathlon series, for a while. I had won the previous two, but knew I would still be under pressure for this one. To make me even more nervous, The Adventure Show from BBC Scotland would be there filming for their next programme. Gulp.

By the time we got to race morning, I was more than a little nervous. To compound this feeling, Glen was a bit late arriving, then we headed off down the A1 … which does not go to Bowhill! After a rapid correction including a sneaky back road that Andy knew, we got there not quite early enough for the good car park, but only just down the drive 🙂 .

No sooner had I started queuing to register, than the camera crew asked me to go over for an interview when I was ready. They had lots of questions, and I talked a lot! As soon as I walked away I started thinking ‘why didn’t I mention ….?’ Since I definitely remembered telling them that it was important to warm up for such a short race, I headed out on my bike to ride up the hill and down the last technical section, plus a bit of the start climb to keep warm. This also helped me to calm my nerves and ignore irrational thoughts about my back tyre going flat. 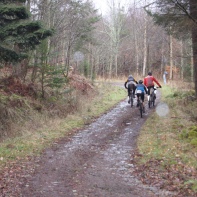 About to overtake on a climb

Both feet on pedals!

Being chased helps me go faster

I always find the mass bike start tricky but soon got into a rhythm climbing the hill. I didn’t really appreciate someone riding into me sideways, but I stayed upright. Twice I jumped off and ran steep bits before going on. There were lots of muddy sections, as usual. Unfortunately, it wasn’t wet enough to have washed away or got to firmer ground underneath, and it was not cold enough for it to have frozen. So we were often riding through a sticky gloop that grabbed at my tyres and pulled me this way and that.

I felt more anxious than usual descending. I’m not sure why; perhaps it was a heightened sense of not wanting to crash out or maybe my head was just not quite in the right place. Still, I attacked the hills and passed a few guys. At the end it got technical through the woods. I walked a short section but was then riding again. At a tricky corner, I was just about to put my foot down and scoot, when someone yelled ‘well done, keep going Rosemary!’. It was just what I needed as I thought ‘I can do this’ and rode on down :-).

Into transition I knew I was first girl, but didn’t know what sort of lead I had. The film crew were there interviewing me as I tried out using a little shoe horn for the first time and got it back to front! They asked if I felt confident about the hat trick now, but I said you never know until the finish, and I meant it.

Off I went, determined to run well. Despite what it may seem, I *have* actually listened to the physio. Injuring my hip has been a good thing. It made me go back to basics and build up properly. Although I’m not totally fixed yet, I’m well on the way and I’ve had several weeks of consistently running a lot more often and a lot further than I have for many years. Our Ötillö race entry is also helping motivate me to keep going out in the dark and cold. Slow it may mostly have been, but it has really improved my running.

At the start of the hill

The course goes up and down, then up a lot more before coming back the same way. My feet kept falling into soft muddy sections, which dragged you in just when your muscles were burning from the effect of cycling! Up we went, clambering over fallen trees and picking the best lines. I didn’t walk a step, even when it got tough. I never knew whether there’d be someone behind me spying a weakness! 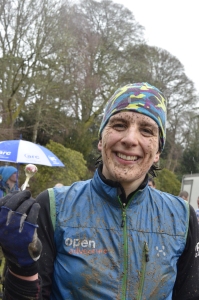 Lollipop. Proof I went to the lollipop handout point.

I collected my lollipop at the top, waved at the cameras, noted my time and started descending. The next girls I saw going the other way were Caroline and Elizabeth. From pervious form and races, my guess was that Caroline was moving up the field and had just overtaken Elizabeth, which turned out to be the case. Last year, Caroline caught me on the descent and I couldn’t respond. This year I estimated I had about a 4 minute lead. Would it be enough?

Through the trees again and a clubmate came past, nimble like the deer I had seen racing across our path earlier. I decided it was time to take a few risks and let go a bit, so I did my best to keep up with him. He was slowly pulling away, but I was actually having fun and it was enough to keep me motivated. I also got in a mini battle with a guy in red and yellow. He’d catch me on the downs only to drop back on the ups! 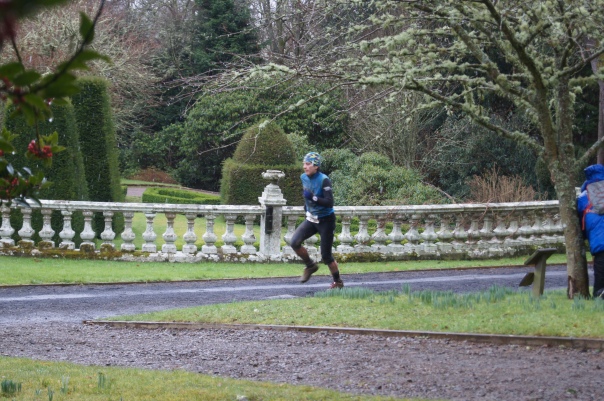 Sprint finish, with Andy hiding by a tree!

The final hill is the sting in the tail of this course. I allowed myself one or two glances over my shoulder to see if there were any Caroline-shaped people coming behind, but it all seemed clear. I wasn’t taking chances though and pushed on, even managing a sort of sprint finish. Hurrah! 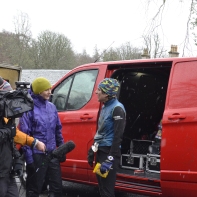 You want me to chat some more??

A bit tired out! 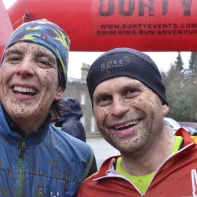 I was in a battle with this guy Mark

Deziree from The Adventure Show was there for a post race interview, though there was an awkward moment where it seemed like I was supposed to talk but I hadn’t been asked a question! I just started anyway, but who knows whether I made any sense. Pretty soon Caroline came in, followed by Elizabeth. It’s always nice to have a podium of friends 🙂 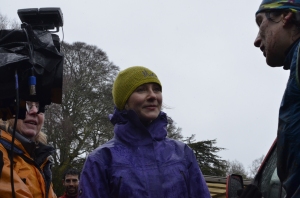 I hadn’t really noticed the rain and snow when I was racing, but got cold much more quickly than normal. I dived back to the car to strip off wet things and get warm and dry, though my lips stayed purple for ages!

The post race analysis of results made happy reading. My bike time was almost the same as last year, but my run was more than 8 minutes faster. This is over a 9.6km course. Somehow I placed better (out of everyone) on the run than on the bike (by two places). This is unheard of for me! I’d like to have biked faster, but maybe I had left more in the tank to do well on the run. It can be a balancing act between the two disciplines. It’s a fabulous feeling to think maybe I could discover that inner runner again, instead of seeing it as an inherent weakness. 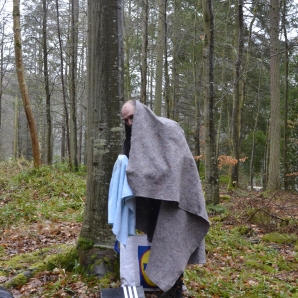 The things some competitors do to preserve their modesty!

I’d like to thank everyone at Durty Events for putting on the series again and keeping us all happy with never-ending mud supplies. Also to Glen for taxi services and various photographers. At this race in particular, I noticed loads of people cheering me on by name, even people I didn’t recognise. Thanks to you all, as it does make a difference! A great race, lots of fun, I lived up to the pressure of expectation (my own, mostly) and I left much more chatty than when I’d arrived 😀 .

Full results for the race here and the series here.
Photos this time from Andy Kirkland, David Hogg and RM Photography.