For the last race in this winter’s series, I was racing with another new person! Heather was the 4th girl to take on an Open 5 with me. I was looking forward to it, though with some apprehension. I thought it could be a tough one racing with someone who scored higher than Caroline and I in November (one of my hardest two races this series so far) and who is very experienced.

First of all I had to get there. I woke up feeling not-so-great on Saturday morning. I took two trains to get to Windermere and alighted in pouring rain. This had been forecast, so I was mentally and physically prepared, but I had been hoping the forecast would be wrong! No such luck; by the time I had ridden down the hill to the ferry, I was drenched. I was booked into the YHA in Coniston, 17km and two hills away. I was so relieved to arrive, sort out wet kit and get warm dry clothes on! I lazed around all afternoon to give myself the best chance of feeling better by Sunday. I can recommend the meals on offer there – less than £12 for a three course meal with four veggie options, and no pasta in sight 🙂 .

The weather forecast was still mostly correct on Sunday: wet. I felt well again though, which was a good thing. Although we set off in a dry patch, I was almost glad when it started raining, as it justified my having put my waterproof on. A little while later, up on the hill in fog, wind and driving rain, I was almost too cold and wishing for a warmer top!

Heather is a really good orienteer, so I was leaving the map reading on the run to her. We started off well, nipping from control to control and making good time. I was impressed as we headed cross country, hit a tiny footpath in a quarry and went straight up to a control.

It suddenly went pear-shaped after that. We were aiming for a ‘knoll’. Unfortunately, we were on a hillside covered in knolls, fog and lost racers. After wandering around back and forth, up and down, checking every knoll, we were not making progress. I was on the verge of suggesting we just left it, but I think, like Heather, I didn’t want to give up and felt as if we had invested too much time in it by now. We relocated by a large track and a likely looking stream (when there’s so much water around, how do you tell which streams are map streams, and which are just ‘pop ups’?), and went straight to the right point.

How not to find a knoll!

Perhaps just as I was anxious to put on a good show, so was Heather, and she was kicking herself for this mistake. And for having a dodgy compass, which was not helping matters 😀 .

We lost perhaps 25 minutes here, which wasn’t ideal. However, we did get back to transition in just under 2h, only dropping 55 points on the way. This would normally be pretty good going! We could still do well. I was confident in a straightforward mountain bike with long road sections … but, it turned out, I seriously under-estimated the difficulty of the routes.

Hillside covered in knolls and fog – a typical view for us on the run!

We started with a ‘short’ loop with lots of high scoring points. But it was a case of ride, push, off, on, ride, push all the way up the hill as we navigated bogs, ditches, steep bits and rocky bits. It took us nearly an hour to cover 6km, and that included the downhill!

As we hit the road, this should have been the moment when I checked how long we’d been out and decided to leave a little group of three lower-scoring controls, giving us time to get some high pointers on a more committing circuit.

Twenty minutes later, I checked how long we’d been out and decided we should leave this little group of … oh no!!! Too late! It was my turn to feel frustrated. Post-race analysis of how long we spent here and our potential alternative has only served to considerably heighten this feeling. I think this was probably the real crux of where we went wrong in the race.

We came up with a new plan, then changed it, then went awry trying to follow an indistinct bridleway across a foggy hillside, had to retrace back uphill (losing another 13 precious minutes) and come up with another new plan. Which was to go straight back, collecting what we could on the way. 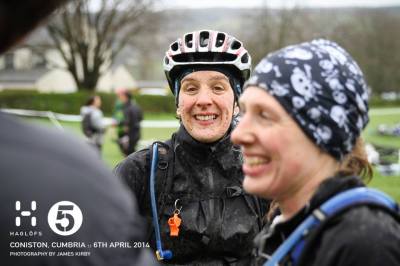 Practising my funny faces! Muddy, but have seen worse this year 🙂

At prize-giving, we were beaten by 10 points into second, but I know we could have done better. There was some good news. We had planned a route with options and get out plans, and it worked – we used them. I didn’t get back late, for once! But on the other hand, we had made some serious tactical errors and mistakes. It was also the first time we had raced together. Conditions were tough and there was a bit of ‘getting to know you’ going on (i.e. chatting!). I remember when I first raced with Lucy, we made some cracking mistakes as we got used to each other. I think I could probably have run faster if Heather had pushed the pace (she was being nice to me and waiting 🙂 ) and we could have biked faster if we had a tow set up. I wasn’t too despondent though, as I enjoyed Heather’s company and had a good time. You have to accept these things can happen sometimes, so long as it doesn’t become a habit 😉 .

The day was topped off by Ant and Cat taking me back to the station so I didn’t have to face riding back over those hills with a bag full of wet kit. I didn’t expect the service to include a bike wash, cup of tea, shower and a time trial bike viewing. Thanks guys! 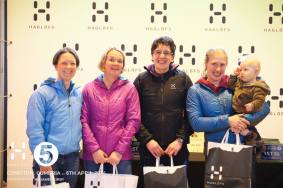 I have really enjoyed this series: racing with Lucy again and winning the overall series, and riding three very different races with three other people. A big thanks to the organisers Open Adventure, all the course planners, to James Kirby for the photos and to the sponsors Haglöfs for the great prizes and impossible-to-miss banners that tell you the end is in sight! 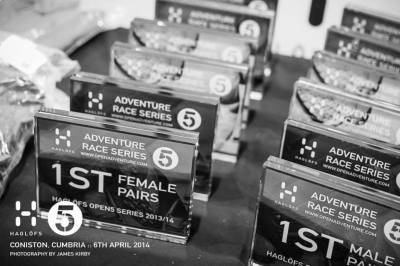 My next adventure race will be with Jon Ellis, who is in my Itera team. We have raced before, but it was nearly three years ago. A lot has changed since then, so it will be interesting to see how we get on. Before then, I have a few other events to do, including the Old Man of Coniston triathlon, which is a target race for me this year.